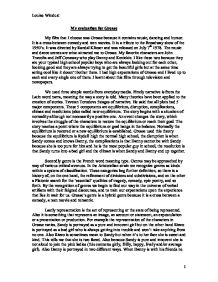 My evaluation for 'Grease'.

My evaluation for Grease My film that I choose was Grease because it contains music, dancing and humor. It is a cross between comedy and teen movies. It is a tribute to the Broadway show of the 1950's. It was directed by Randal Klieser and was released on July 7th 1978. The music and dance scenes are what attracted me to Grease. My favorite characters are John Travolta and Jeff Conaway who play Danny and Kenickie. I like these two because they are your typical high school popular boys who are always looking out for each other, looking good and they are always trying to get the beautiful girls but at the same time acting cool like it doesn't bother them. I had high expectations of Grease and I lived up to each and every single one of them. I learnt about this film through television and newspapers. We used three simple words from everyday media. Firstly narrative is from the Latin word narra, meaning the way a story is told. Many theories have been applied to the creation of stories. Tzvetan Torodovs 5stages of narrative. He said that all plots had 5 major components. These 5 components are equilibrium, disruption, complications, climax and resolutions (also called new equilibrium. The story begins with a situation of normality although not necessarily a positive one. ...read more.

The mis-en-scenes are standard, the shot size varies from a standard to a birds-eye view to an extreme close up etc. the compositions are straight on and the lenses are standard. All of these help to tell the story because it gives it a normal typical high school day and adds effect because if it had abnormal technical analysis then it wouldn't match the genre, because it is a conventional American film. There was nothing really unique about the narrative because it followed all the codes and the technical analysis, so it didn't reinvent certain generic conventions or new narratives. The type of ending closes the film off and also the ending was effective because it was at a funfair, which connotes the idea of fun and happiness and it also denotes a typical end of school party in America. The characters are realistic and are normal people and they are also authentic and believable characters. The mis-en-scenes have al been constructed in a way that tells me that it is an average high school where there are normal students who go through and do everything normal teenagers go through e.g. dates. The locations are an American diner, a drive in, the driving race and the high school, which signifies that these are all the cool spots where the T-birds and The Pink Ladies hang out. ...read more.

The synchronization of the visual and the sound of Grease are connected in a way that if there were no visual Grease wouldn't be the great film it turned out to be and visa versa, this is a promotional strategy. In conclusion the target audience would have to be everyone because anyone can watch Grease because they will enjoy the storylines and the optimism. The most effective part about Grease is that there are not really any negative bits that cannot be resolved easily, because all round Grease the different storylines have made practically no mistakes in it. The four typicals are settings, tag names, genre, and narrative. The typical settings are the high school and the diners. The typical tag names is a blonde, an exchange student, the grunger, the rebel, the geek, the beautiful girl, the ugly girl, the stupid parents, the teacher and the popular guy. The typical genre is comedy, romance and a teen movie. Finally the typical narrative is Tzvetan Torodovs 5stages of narrative. The main things that I found out bout Grease was that the narrative and the settings were surprisingly good and the best bit of the film is that it is a mix of genre so it suits everybody's needs and the worse thing would have to be settings because all teen movies are always set in America and I personally think that they should set a Grease like film over in England. ?? ?? ?? ?? Louise Windust 1 ...read more.