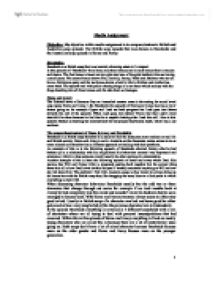 Media Assignment Objective: My objective in this media assignment is to compare/contrast a British and Australian soap episode. The British soap episode that was chosen is Brookside and the Australian soap episode is Home and Away. Brookside: Brookside is a British soap that is set around a housing estate in Liverpool. In this episode of 'Brookside' they focus only three houses and in each house there is tension and drama. The first house is based on two girls (and one of the girls brother) who are having a small party. The second house shows Tim, Emmily, Jimmy, Nikki and Jahrome who are all have a Halloween party and the last house shows a family who's children real mother has come back. The episode end with police chasing thugs in a car chase which ends up with the thugs breaking into all three houses and the take them as hostages. Home and Away: The fictional town of Summer Bay on Australia's eastern coast is the setting for much loved soap opera Home and Away. Like Brookside this episode of Home and Away also has a lot of drama going on for example Gypse and Leah are both pregnant but Leah goes into labour towards the end of the episode. ...read more.

The family we do see in this episode are the Murray's and the biological mother of the children who has come back to see her children after abandoning them when they were small. The children don't want to know so we could say that this is one treatment that the children are giving their real mother. In the episode of Home and Away we see more treatment of family relationship then Brookside but not as much as would see in other soaps like Eastenders. One of the examples in Home and Away is the tension between Vinnie and Leah's mother about why Leah's mother has to be there when she goes in to labour. In this episode of Brookside you have a lot of controversial issues for example with the Murray family you see through out the whole episode they are all arguing about the return of their biological mother and weather they should let her explain her self. Then in the house with Jimmy you can tell there is tension between Nikki and Jahrome. Towards the end of Brookside we see a huge dramatic scene with the thugs breaking into all three houses. ...read more.

In the episode of Brookside we know they have high budget because we see cars getting smash and also the following episode after that the thugs shoot down a police helicopter, which explodes down in a petrol station. Media Assignment Home and Away has probably has one of the most attractive setting in today's modern soaps and the reason being is its sunny hot beach backdrop. The beach in Home and Away is where every one seems to make after they had an argument and most of the competition in Home and Away are always held like swimming and surfing. The rest of the setting is in the character house or at the surf club. With Brookside all of the setting is set within the houses and around house and they don't usually move location. An important point to take is how Brookside last scene is a catastrophe scene but where as with Home and Away In conclusion both soaps have its ups and downs and when I personally watched both episodes of both soaps I didn't really favour any of them because Home and Away is too dreamy and Brookside is just to boring (apart from the last dramatic scene), so I the best put together soap in my judgment is Eastenders (the king of soaps). 1 ...read more.