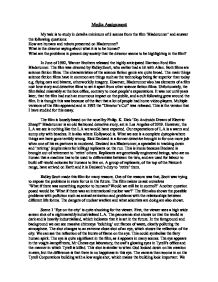 Media Assignment My task is to study in detail a minimum of 3 scenes from the film 'Bladerunner' and answer the following questions: How are humans and robots presented on Bladerunner? What is the director saying about what it is to be human? What are the problems in present day society that the director seems to be highlighting in the film? In June of 1982, Warner Brothers released the highly anticipated Harrison Ford film Bladerunner. The film was directed by Ridley Scott, who earlier had a hit with Alien. Both films are science fiction films. The characteristics of the science fiction genre are quite broad. The main things science fiction films have in common are things such as the technology being far superior than today e.g. flying cars and bizarre, otherworldly imagery. However, Bladerunner also has elements of a film noir love story and detective films to set it apart from other science fiction films. Unfortunately, the film failed miserably at the box office, contrary to most people's expectations. It was not until years later, that the film had such an enormous impact on the public, and a cult following grew around the film. It is thought this was because of the fact that a lot of people had home video players. Multiple versions of the film appeared and in 1992 the "Director's Cut" was released. This is the version that I have studied for this essay. The film is loosely based on the novel by Philip. K. d**k 'Do Androids Dream of Electric Sheep?' Bladerunner is an old fashioned detective story, set in Los Angeles of 2019. ...read more.

This creates an assumption that everyone hides from everyone else and people do not interact socially with others, only out of necessity. What the director is showing here is the downfall of human spirit and the relationship between humanity and nature. In scene 9 'Chews Visitors' we are shown the physical superiority of the replicants over humans. The extreme close up of Roy Batty's hand shows us that he is dying. An extreme close up of Roy Batty's face, which is sweating, makes us realise that he is dying. We also realise that Batty is the leader of the replicants, as Leon looks away nervously in the close up shot showing that he is not in control. Chew seems to be quite a ridiculous character as he keeps on talking to himself and the unusual clothes he is wearing. The next shot is set in a blue light, an element of film noir, in which the replicants appear in a silhouette. The shot is in a low angle shot showing the superiority of the replicants. Furthermore, the medium shot showing them pull Chew's pipe, which keeps him warm, tells that Chew can't survive the cold as he is human whereas the replicants don't appear to be cold. 'Fiery the angels fell, deep thunder rolled around heaven.' This poem quoted by Batty indicates that we should link the robots with the story of Lucifer's fall. The reference to Lucifer's fall also comes again later in the film. When Batty puts his hand in the liquid Chew realises that they are the Nexus 6 model replicants, his reaction to this is shown in the change of tone and pitch of his voice. ...read more.

The director has portrayed an apocalyptic world, the world has been radically destroyed, however he is much more subtle than James Cameron who directed 'Terminator'. He has used literary allusion to make the world more believable. The director focuses on the relationships between humans and androids, as this is a different kind of science fiction. This results in a slow and deliberate style and pace rather than an action adventure film. In conclusion the humans' and robots' roles have been reversed in this film. The robots appear to be more human as they show their emotions regularly and communicate with each other, while the humans don't show their emotions, are only bothered about themselves and very rarely communicate with each other. Earth is a big monopoly where the rich and powerful control everything while the 'little' people suffer quietly. The director is also saying that life will become depressing if we don't stop playing with other peoples lives e.g. Going into war. Cloning is also highlighted in the film. With the recent advances in cloning, what does it mean to be a human. Will people try to differentiate between a clone and a human? With people now becoming the creators of life, what responsibilities will these people have towards their creation? The problems with nuclear war are also highlighted, problems such as killing wildlife, destroying the atmosphere so that the world is in darkness for most of the time, and acid rain. If scientific progress continues to be conducted for business and not for the best interests of humanity, then the natural world will be exploited and damaged until there is no beauty left in the world to revive dying spirits. So people would stay depressed and lead a pitiful existence. All these problems are highlighted in the film. ...read more.