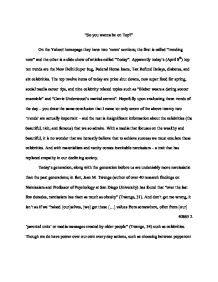 Narcissism Essay. The societal norms of the ideal life and person have been redefined over the years, leading to Americans abandon[ing] the vision of themselves as part of an interconnected social system and instead turn[ing] to the narcissistic p

"So you wanna be on Top?" On the Yahoo! homepage they have two 'news' sections; the first is called "trending now" and the other is a slide show of articles called "Today". Apparently today's (April 8th) top ten trends are the New Delhi Super bug, Federal Home loans, Tax Refund Delays, diabetes, and six celebrities. The top twelve items of today are price shut downs, new super food for spring, social media career tips, and nine celebrity related topics such as "Bieber wears a daring soccer ensemble" and "Carrie Underwood's marital secrets". Hopefully upon evaluating these trends of the day - you draw the same conclusion that I came to: only seven of the above twenty two 'trends' are actually important - and the rest is insignificant information about the celebrities (the beautiful, rich, and famous) that we so admire. With a media that focuses on the wealthy and beautiful, it is no wonder that we honestly believe that to achieve success we must emulate these celebrities. And with materialism and vanity comes inevitable narcissism - a trait that has replaced empathy in our declining society. Today's generation, along with the generation before us are undeniably more narcissistic than the past generations; in fact, Jean M. Twenge (author of over 40 research findings on Narcissism and Professor of Psychology at San Diego University) ...read more.

All we want as humanity is respect and admiration. Before in my grandparents generation, becoming a doctor or profitable entrepreneur might have earned you these, but now in the 21st century - if I tell my peers that I want to do AIDS research in Africa, they look at my like I'm off my rocker. It seems that only celebrities, like Football stars who work so hard for their hundred million dollar paychecks, are the only ones who can acquire widespread awe for their immortal talents. The key difference is that "previous generations may have been interested in the so called fabulous life of celebrities, [but...] kids today actually believe fame is achievable" (Austin). Generations past may have admired celebrities such as Judy Garland or Robert Redford, but they acknowledged that realistically they would never make it to Hollywood. Today's generation honestly believes that they are 'special' - that they are capable of doing absolutely anything they want to, and mommy and daddy will help them. A three year old that I babysit next door decided that she wanted to name her new kitten Clara, after herself ; I asked her why she would want that 40865 4 and she replied "because I am the greatest person in the world, and I want my kitty to be too". I was quite shocked when I heard this, and I found myself questioning what inspired this change in thought. ...read more.

Additionally, it is not uncommon to drive around poor areas like the Beach Flats, and see families who have shiny new Cadillac's in the drive way of their shack like home. We believe that if we simply have the same clothes and/or items as our famous role models, we will become them. Why we feel celeb-success is easy to obtain, is perhaps an additional change in emphasis towards the mistakes that celebrities make. According to my grandmother, forty years ago, they would never talk about a celebrity like Lindsay Lohan visiting rehab, or Jon and Kates divorce - 40865 6 instead they would have only focused on the positive in celebrity media. The focus on the positive made the younger generations feel that that level of fame was unattainable, because these celebrities were 'immortal' and never made mistakes, they weren't average Joe's like the rest of us. But in today's media we put more of an emphasis on the negative, or the shunned such as wild sex scandals, drugs, abuse; these are the topics that excite people that will bring in the viewers and the money. We are excited by these negative things because it makes us feel better about ourselves, fuels our narcissism. For every success that celebrities have, it only pushes us to be bigger, better, bolder. For every failure we are reminded that we can reach societal immortality, because to be immortal you no longer have to be pure and holy. ...read more.