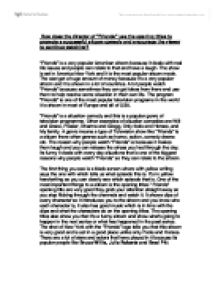 &amp;nbsp;How does the director of &quot;Friends&quot; use the opening titles to promote a successful sitcom comedy and encourage the viewer to continue watching?

How does the director of "Friends" use the opening titles to promote a successful sitcom comedy and encourage the viewer to continue watching? "Friends" is a very popular American sitcom because it deals with real life issues and people can relate to that and have a laugh. The show is set in America New York and it is the most popular sitcom made. The cast get a huge amount of money because it's a very popular sitcom and it is shown in a lot of countries. A lot people watch "Friends" because sometimes they can get ideas from there and use them to help resolve some situation in their own life. The program "Friends" is one of the most popular television programs in the world it is shown in most of Europe and all of USA. "Friends" is a situation comedy and this is a popular genre of television programme. Other examples of situation comedies are Will and Grace, Frasier, Dharma and Gregg, Only fools and Horses, and My family. A genre means a type of Television show like "Friends" is a sitcom there other genres such as horror, action, comedy drama etc. ...read more.

The song is very uplifting it is why it catches your attention. The lyrics also go in with the genre of the sitcom. These are some of the lyrics to the song. So no one told you that life was going to be this way: This part of the song applies to Rachel green because she did not think that life was going to be the way that it turned out. Your job's a joke you're broke your love life's DOA: Joey is nearly always broke and his job is not exactly getting him anywhere, most of the time he has to borrow money off Chandler. It's like you're always stuck in second gear, Phoebe seems to be stuck in second gear because she doesn't have a job or a boyfriends it seems her life has no meaning. When it hasn't been your day your week your month or even your year, This refers to the viewers as well as the characters in the sitcom. I'll be there for you.....: Meaning that friends are there when you need them. When the rain starts to fall....: The rain starts to fall refers to when bad things happen your friends will be there. ...read more.

I like watching "Friends" because it makes me laugh it is relaxing and I can relate to everyday situations from it because in it they show things that happen to me and you the just show it in a funnier way. The opening titles are very important because the sitcom has to grab your attention in order for you to stop and watch it. The opening titles give you a good idea of what is happening in the sitcom and tell you the personality of each character. The opening titles of "Friends" are on of the keys that made "Friends" a successful sitcom it just does everything right in the opening titles. The 3 short clips to introduce each character the music suits the sitcom the people dancing and laughing and dancing together in the fountain this all show how friendly and natural the sitcoms is and that's what people like friendly and natural sitcoms that make you laugh and relate to them. All the people in "Friends" are funny and natural they all have different stories but in the end it shows that friends are always there for you and are more important than anything else that's what makes "Friends" one of the most successful sitcoms ever made. ...read more.