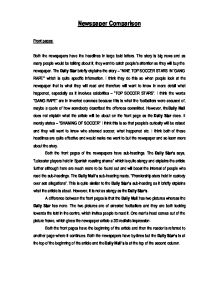 Newspaper Comparison Front pages: Both the newspapers have the headlines in large bold letters. The story is big news and as many people would be talking about it, they want to catch people's attention so they will buy the newspaper. The Daily Star briefly explains the story - "NINE TOP SOCCER STARS IN 'GANG RAPE'" which is quite specific information. I think they do this so when people look at the newspaper that is what they will read and therefore will want to know in more detail what happened, especially as it involves celebrities - "TOP SOCCER STARS". I think the words "GANG RAPE" are in inverted commas because this is what the footballers were accused of, maybe a quote of how somebody described the offences committed. However, the Daily Mail does not explain what the article will be about on the front page as the Daily Star does. It merely states - "SHAMING OF SOCCER" I think this is so that people's curiosity will be raised and they will want to know who shamed soccer, what happened etc. I think both of these headlines are quite effective and would make me want to but the newspaper and so learn more about the story. Both the front pages of the newspapers have sub-headings. ...read more.

In the Daily Mail, there is a strapline reading, "Leicester City stars on training break in Spain were drinking heavily and brawling before alleged attacks on women in hotel room, say staff." This explains the story further and is quite dramatic, so will make the reader to read the article - "drinking heavily", "brawling", and "attacks on women". These terms add interest and shock the reader, especially as celebrities are involved and these people are supposed to set an example to their fans. However, in the article in the Daily Star, there is no strapline or sub-heading which gives me the impression that this newspaper is of a more simple style. The layouts of the newspapers strike me as being quite similar. They both take up a double page spread. On the left they both have the article as well a couple of pictures, though the Daily Mail has three pictures on the left page. Both the right pages are taken up with pictures as well as a section with a picture of each player and w description of what they are accused of. However, the Daily Mail's is more detailed as it also has some history on each of the footballers. Also, the Daily Mail has a small article linking with the footballers article, with the headline reading, "Young, overpaid and violently out of control". ...read more.