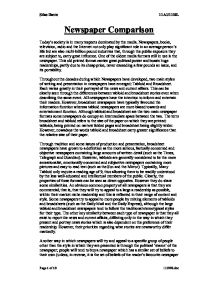 Newspaper Comparison Today's society is in many respects dominated by the media. Newspapers, books, television, radio and the Internet not only play significant role in an average person's life but are also multi-billion pound industries that, through the public exposure they are subject to, carry great influence. One of the oldest media formats still in use is the newspaper. This old printed format carries great political power and boasts huge readerships, partly due to its cheap price, never exceeding a few pounds an issue, and its portability. Throughout the decades during which Newspapers have developed, two main styles of writing and presentation in newspapers have emerged: Tabloid and Broadsheet. Each varies greatly in their portrayal of the news and current affairs. This can be clearly seen through the differences between tabloid and broadsheet stories even when describing the same event. All newspapers have the intention to inform and entertain their readers. However, broadsheet newspapers have typically favoured the information function whereas tabloid newspapers are more biased towards and entertainment function. Although tabloid and broadsheet are the two main newspaper formats some newspapers do occupy an intermediate space between the two. The term broadsheet and tabloid refers to the size of the paper on which they are printed: tabloids, being printed on narrow folded pages and broadsheet being slightly wider. However, nowadays the words tabloid and broadsheet carry greater significance than the relative size of their paper. Through tradition and some issues of production and presentation, broadsheet newspapers have grown to a definition as the more serious, factually concerned and objective newspapers containing large amounts of written detail (such as the Times, Telegraph and Guardian). However, tabloids are generally considered to be the more sensationalist, emotionally concerned and subjective newspapers containing more pictures and easy to read text (such as the Sun and the Mirror). Typically, Many Tabloid only require a reading age of 9, thus allowing them to be readily understood by the less well-educated and intellectual members of the public. ...read more.

It then goes on to discuss the 'drama' and "amazing stories" again with less of a focus on verification of their truth, but rather the excitement and drama of them. It talks about the "Heartbreak, horror and heroism". Devices like this alliterative clich� help make the story as a whole more memorable, and cue the emotions the reader is supposed to identify with regarding the tragedy. The image of "Helicopters plucking" tourist off the hotel conjures the image of small insects more than people and the sense that their rescue is just in time. Also the tourists are described as "screaming survivors," suggesting that the reader is sufficiently engrossed in the events to in effect 'hear' their pain. This is followed by "21-storey hotel and balconies in scenes reminiscent of the film of Towering Inferno" in an explicit analogy with the film. The idea of television and film 'scenes' is also continued throughout to highlight the 'extraordinary' events of the fire, like films. However, we are reminded that this event is real - not fictional. It describes how "guests slid to safety on ropes made from bed sheets" suggesting the positive elements of bravery and innovation opposing the tragedy of the fire. Although many key facts included in Account A are omitted from Account B, Account B enters in to great detail regarding personal stories, providing the ages and names of those survivors who made "amazing escapes". Most of the descriptions of the human interest stories are very hyperbolic. "Schoolgirl Maria Lagrasso, 16, from New Jersey told of racing down corridors only to be met by walls of flame and smoke" using words implying the desperation to survive, such as 'racing down corridors' and images like 'walls of flame and smoke' to create an atmosphere of fear and death. Another device used in many of the personal accounts is the offsetting the relaxed imagery and ideas of lazy holiday enjoyment "he had just woken up from an afternoon siesta.." ...read more.

This contrasts with Account B where the author is just named "By Ian Hepburn" and in Account A where the author is just named and located "From Michael White" "in Washington" suggesting perhaps Account C was in the most favourable position for local reporting. Account C holds its middle-ground stance throughout the article in a variety of respects. It mixes the factual content of a broadsheet and the emotional accounts of a tabloid, although it adds its own element to appeal to the reader wanting to be both informed and entertained by personal accounts. It also took its own opinion of the event, which it voiced strongly, but perhaps not as strongly as in Account B, with the emphasise on the blame of the union. The style of Account C is one in which linguistic devices such as alliteration, assonance, metaphors and similes would be expected to reside as it follow a mass-populist approach to the writing of its articles as would Account B. However facts are given, although in a more diluted, less distilled form than those given in Account A. It also follows a more structured path than Account B, which has a tendency to hop around with little linking, creating a more conversational effect, far detached from that of Account A which follows a clear and precise structure of logically linking facts and events. In conclusion, each newspaper followed very different styles, with strong elements typical of its particular market niche, although it is impossible to make sweeping comments that will always hold true about the style of each type of newspaper, as there is always one variable that cannot be accounted for, the author. This is why the broadsheet style of Account A can contain the occasional slip of dramatic language, and why tabloid Account B can make use of the odd fact and statistic, and why Account C is not just a straight mix of the two, but has its own unique style. Silas Davis English - Newspaper Comparison 11A1/11RL Page 2 of 10 Newspaper Comparison1correct.doc Silas Davis 11A1/11RL Page 1 of 10 Newspaper Comparison1correct.doc ...read more.