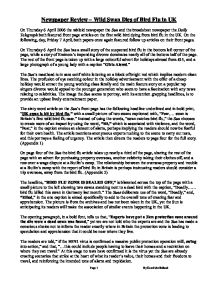 Newspaper Review - Wild Swan Dies of Bird Flu in UK On Thursday 6 April 2006 the tabloid newspaper the Sun and the broadsheet newspaper the Daily Telegraph both featured front page articles on the first wild bird dying from bird flu in the UK. On the following, day, Friday 7 April, both papers once again featured follow up articles on their front pages. On Thursday 6 April the Sun has a small story of the suspected bird flu in the bottom left corner of the page, while a story of Eminem's impending divorce dominates nearly all of the bottom half of the page. The rest of the front page is taken up with a large colourful advert for holidays abroad from �15, and a large photograph of a young lady with a caption "Girls Alewd." The Sun's masthead is in sans serif white lettering on a block of bright red which implies modern clean lines. The profusion of eye catching colour in the holiday advertisement with the offer of a cheap holiday would attract the young working class family and the main feature story on a popular rap singers divorce would appeal to the younger generation who seem to have a fascination with any news relating to celebrities. ...read more.

In contrast to the Sun, the Daily Telegraph has placed the bird flu article on the left of the middle section of the page and its headline, "Alert as wild swan dies of avian flu in Scotland," immediately tells the reader where the outbreak has occurred, unlike the Sun's report. The Daily Telegraph quotes specific experts by their names and their professional position and this creates an impression of credibility. Where the Governments chief veterinary officer is quoted as saying, "I have every confidence...," or a professor of virology saying, "...still a big step away from a domestic chicken or even a human being infected," both quotes intending to create a feeling of security and confidence in the authorities to handle the outbreak. It also mentions, "The H5N1 strain has killed more than 100 people, mostly Asian, since 2003," but then it balances this statement with, "However, it has not mutated to be able to transfer between humans." The entire article is well balanced without emotive language and with a tone which is focused to create a feeling of reassurance to the reader by setting out the contingency plans. (Appendix 3) On the following day, 7 April, the Sun's main story, which dominates two thirds of the front page, is of the murder of a nurse and the top part advertises a free sweepstake kit for the Grand National. ...read more.

(Appendix 7) Most of page three covers the impact the finding of the dead swan has had on the village and the headlines, "Seaside village weathers the media storm," proposes that it's the media attention and, not the finding of a swan killed by bird flu, that is disrupting the village life. The article seek to reassure once again that if the residents of this village don't fear catching bird flu then the rest of the country should not be anxious. To contribute to this, the top third of page three has a colour picture of a resident walking his dog on the beach, a perfect picture of normality. (Appendix 8) The Daily Telegraph has designated an enormous amount of space to the bird flu and this clearly shows it isn't underplaying the seriousness of the situation. What it has done is to document all the available facts in a clear unemotional approach which suggests that by giving the readers all existing knowledge they will be intelligent enough to form their own opinions. The Sun on the other hand, talks of roadblocks, the impact it could have on domestic birds and the incompetence of the various agencies involved, all contributing to the inference that bird flu is going to have a major impact on the man in the street. ?? ?? ?? ?? Page 1 By Hazel McClelland ...read more.