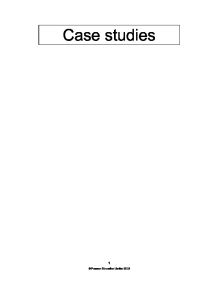 Nike sprints ahead of the competition?

Case studies Acknowledgements We are grateful to the following for permission to reproduce copyright material: 'Getting to know you' (Acreman, S. and Pegram, B.), originally published in Research Magazine, November 1999, pp. 36-41. In some instances we have been unable to trace the owners of copyright material, and we would appreciate any information that would enable us to do so. CASE 1 Nike sprints ahead of the competition? Nike was founded by Bill Bowerman, the legendary University of Oregon track and field coach, and Phil Knight, a University of Oregon business student and middle-distance runner under Bowerman. The partnership began in 1962 as Blue Ribbon Sports (BRS); their first-year sales totalled $8,000. In 1972 BRS changed its name to Nike, named after the Greek winged goddess of victory. Nike employs 22,000 people worldwide, from Nike World Headquarters in Oregon. With 1,500 employees working at the Laakdal Customer Service Centre, Belgium has the most employees of any EMEA (Europe, Middle East and Africa) country. The Netherlands is a close second, with 1,200 employees working at the European HQ in Hilversum. Nike is the number one athletic footwear company in the US and the number two American brand in terms of name recognition among overseas consumers, a status shared with IBM and second only to Coca-Cola. This high degree of recognition is probably one of the main reasons Nike has been so immensely successful. For the 2001 fiscal year sales in the US were $4,819m, up 2% from 2000. 51% of Nike revenue is generated by sales in the US. In Europe, sales were $2,585m, up 7% from 2000. Despite their healthy levels of growth, analysts forecast a change in Nike's future. Although the company remains well managed, experts feel the company will have to work harder to grow in the future. Consumers are becoming less than enthralled with Nike's $100-plus prices and are 'clearing out' their Nike-filled closets with other brand name clothing. ...read more.

could increase effectiveness through internalisation. Furthermore, he wondered whether combining these two approaches resulted in even greater effectiveness. In order to research this, a 2 ? 2 factorial design was adopted. Sidedness (one-sided versus two-sided) and type of spokesperson (celebrity versus non-celebrity) were the two factors. Seventy-seven executives enrolled in an executive MBA programme were randomly assigned to four groups: one-sided/non-celebrity, one-sided/celebrity, two-sided/non-celebrity and two-sided/celebrity. Four advertisements corresponding to these criteria were made up, and each member of each group evaluated the appropriate advertisement on the basis of four variables: 1. Expectancy-value brand attitude (A). 2. Global brand attitude (B). 3. Global attitude towards the advertisement (C). 4. Purchase intention (D). Expectancy-value brand attitude represented the degree to which the respondent believed the product possessed an attribute the advertisement claimed it had. Global brand attitude was a measure of how appealing the respondents found the product in the advertisement to be. Global attitude towards the advertisement was an evaluation of the advertisement's effectiveness. Purchase intention indicated how likely a respondent was to purchase the product when an opportunity to do so came about. Table 1 shows the mean (x) and standard deviation (sd) values, along with the number of respondents (n), for each variable across each of the groups in Kamins's study. Note that the results from related groups can be combined to yield information on each of the four group characteristics (one-sided, two-sided, non-celebrity and celebrity) separately. Table 2 contains the ANOVA results for the effect of the independent variables of sidedness (E) and type of spokesperson (S). These results provide valuable information about the effectiveness of celebrity spokespersons in advertisements. Although the above research results are useful, they are also very specific. Celebrity advertising can be researched in other ways. For example, dead celebrities have been shown to be hip, hot and safe. Although they are not cheap (advertisers do have to pay licensing fees to the celebrities' estates), they are safe, because they can't do anything unpredictable that might jeopardise a product's image or embarrass the sponsor. ...read more.

A survey conducted by Video Storyboard Tests, Inc. rated the DuPont Stainmaster television commercial the fourth 'most popular television commercial'. Based on its success with DuPont Stainmaster, the industry leader decided to forge new ground. For most of its history, the residential segment had typically been the most blas� segment of the carpet market. Styles tended to be simple, colours passive, and features uniform across all competitors in the industry. Technically, industry players maintained that differences did indeed exist, but in the words of one industry analyst, 'The differences were there in style and fibre quality, but the householder out shopping for carpet did not really know or care, they only like what they could see and feel.' As such, DuPont wondered if the styles and designs so popular in the commercial segment could be transferred to the residential segment. Was the average household willing to make carpeting more than just a backdrop for other furnishings? If the programme were to be successful, it would mean further differentiation from other nylon fibre producers by creating a new segment based on fashion and status for residential carpets, increasing brand awareness among consumers for DuPont (resulting in increased demand for DuPont fibres), and bringing in a new dimension to residential sales which would be difficult for PP carpets to duplicate and would solidify DuPont as the leader in the residential segment. However, it would be an expensive undertaking, involving a significant amount of publicity and risking its reputation with its major fibre clients. In addition, if DuPont were to proceed with the Designer Collection, it would have to move fast. The largest trade show in the industry, in which the companies announced their major designs and programmes for the coming year, was due in three months. If DuPont wanted the Designer Collection to have a maximal impact, it would have to have carpet samples and promotional materials ready for distribution at the show, and their marketing programme in line to begin shortly thereafter. Thus, the go or no-go decision would have to be made within six weeks. ...read more.