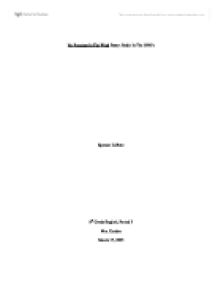 No Promises in the Wind

No Promises In The Wind Essay: Radio In The 1930's Spencer LaBute 8th Grade English, Period 3 Mrs. Gordon March 17, 2005 People in the 1930's were heavily influenced by the radio. By 1939, almost everybody in America owned a radio. A family sitting around the radio, listening to a comedy routine or the news became commonplace. One of the things that appealed most to listeners was that there were many different things to listen to. Some of the daily programming on the radio included soap operas, adventure stories, news reports, public speeches, and comedians. People liked that they could get entertainment in their house instead of having to travel to the movie theater, the circus, or any other entertaining venue. Convenience played a major part in the popularity growth of radios. ...read more.

The following quote shows the lasting impression of the radio; "There LaBute 2 are three things I shall never forget about America-the Rocky Mts., the Statue of Liberty and Amos 'n' Andy." -George Bernard Shaw The radio was also very unruly and confusing at times. At that time, radio was such a new agent that very few regulations were made. Radio was beginning to be cluttered because of all the free air time and no control on what went on the airways. Radio stations often broadcasted over each other and created static filled programming. Astrologers, wacky psychologists, and motivational speakers rushed to get air time. Once everyone saw how huge the radio business was becoming, they took advantage of the opportunity and filled up the airwaves. These agitating messages had to be taken care of. ...read more.

His 'fireside chats' were really just miniature state of the union addresses. Huey Long also used the LaBute 3 radio as means of political career advancement. A few radio programs were educational; however, the majority of radio programming was for news or entertainment value. Again, the radio was one of the most valuable inventions of the 20th century for many reasons. It gave hopeless people jobs as well as gave everyone entertainment. It was a way of escaping your troubles for awhile, or a lifeline of sorts in the hard times that America was facing. The radio is still widely used today, which shows how influential and important it is. Radio has changed since its golden days in the 20's, 30's, and 40's. It is now a secondary source of music, news, and entertainment. Obviously, times have changed and technology has increased, however, the radio still remains one of the most popular and useful mediums of communication. ...read more.