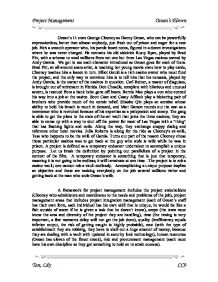 Ocean's 11 stars George Clooney as Danny Ocean, who can be powerfully expressionless, better than almost anybody, just fresh out of prison and eager for a new job. He's a smooth operator who, his parole board notes, figured in a dozen investigations where he was never charged. He contacts his old sidekick Rusty Ryan, played by Brad Pitt, with a scheme to steal millions from not one but three Las Vegas casinos owned by Andy Garcia. We get to see each character introduced as Ocean goes for each of them. Brad Pitt, an all-around scam artist, is teaching hot young movie stars how to play cards, Clooney teaches him a lesson in turn. Elliot Gould is a rich casino owner who must fund the project, and the only way to convince him is to tell him that his nemesis, played by Andy Garcia, is the owner of the casinos in question. Carl Reiner, a master of disguises, is brought out of retirement in Florida. Don Cheadle, complete with hilarious and unusual accent, is rescued from a bank heist gone off beam. Bernie Mac plays a con who conned his way into a job at the casino. Scott Caan and Casey Affleck play a bickering pair of brothers who provide much of the comic relief. Shaobo Qin plays an acrobat whose ability to hold his breath is much in demand, and Matt Damon rounds out the cast as a newcomer who is recruited because of his expertise as a pickpocket and snoop. ...read more.

Moreover, the project life cycle is said to be a collection of phases. The first phase is planning and determining the objectives of the project. In the movie, it is to get rich and get back at the man who stole Ocean's wife's heart. Next is looking for the right person/s for a/some particular type of job/s. But most of the time it is fun to work with people whom you really know and know that gets the job done. This willingness is important in letting a person in to the team. The film itself ran at a series of short scenes that never are given time to build, never involve us. The film postulates that Danny and Rusty Ryan are old partners in crime, and there is a subtle scene early on when Danny walks in on Rusty's class in poker for Hollywood actors, and Rusty deals a cold deck to let Danny pick up some cash from the marks. But somehow the director lets even that simple a setup get away from him by losing his focus on what's important for us in the audience to see. With such a large cast, there's not a lot of room for character development, so the movie instead gives you scenes that establish what everyone is like. Each of the team is given tasks in a particular time; some work ahead, some after a task has been completed, while others alongside another task. ...read more.

As a whole the movie have somehow followed the basic project procedures, despite some loopholes in the script. It will take each member of Ocean to decide his path, weather to fail or succeed in opening and stealing Garcia's riches. In projects like this one, it includes sacrifices like what George Clooney did at the end of the movie. A team leader would usually take fault of what the team has done wrong and make better result at the end because leaders are the example to his / her subordinates and they have a clear view of what he / she wants to happen. In doing so, the project is in good hands. George Clooney had a clear view on what he really want to happen, to claim what is rightfully his; and that is Tess, played by Julia Roberts. He sacrifice his freedom by letting Garcia know Clooney was part of the robbery incident, through the video cameras around them, he showed Tess how he loved her so much and he was willing to go back to prison just to prove Tess his love to her. After all, Clooney was only in prison 6 months and got his share of money. This writer finds and rates the movie 10 being the highest as a dismal 6 but for me I could give a 7. Project Management Ocean's Eleven Tan, Lily CC9 ...read more.