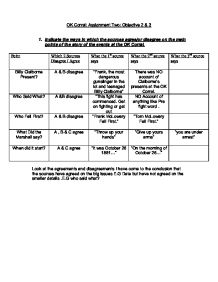 1. Indicate the ways in which the sources agree/or disagree on the main points of the story of the events at the OK Corral. Point Which 2 Sources Disagree / Agree What the 1st source says What the 2nd source says What the 3rd source says Billy Claiborne Present? A & B disagree "Frank, the most dangerous gunslinger in the lot and teenaged Billy Claiborne" There was NO account of Claiborne's presents at the OK Corral. Who Said What? A &B disagree "This fight has commenced. Get on fighting or get out NO Account of anything like Pre fight word . Who Fell First? A & B disagree "Frank McLowery Fell First." "Tom McLowery Fell First." What Did the Marshall say? A , B & C agree "Throw up your hands" "Give up yours arms" "you are under arrest" When did it start? A & C agree "It was October 26 1881..." "On the morning of October 26..." Look at the agreements and disagreements I have come to the conclusion that the sources have agreed on the big issues E.G Date but have not agreed on the smaller details .E.G who said what? ...read more.

3. The source from the "Daily Epitaph" claims to be an eyewitness account of the events. How useful is this source as an account of the events at the OK Coral? Explain your answer. Source B by Mr Coleman is considered to be a primary eyewitness account of the events at the OK Coral and is very useful. If you look into the account it might not be as reliable as first thought. Firstly he is reporting his account of the events to a newspaper (The Daily Epitaph) and editors have a tendency to twist change and replace words to make the story they are publishing more interesting and exciting to the reader this aids the newspaper to sell more copies, therefore it might not be the full account of events. The account has number dots (...) which could strongly suggest the editor has edited or purposely removed the comments made by Mr Coleman in aid to change or make the story more interesting to the reader or once again to favour there own opinion. ...read more.

has been written in the first person "I was at the OK Corral at 2.30 pm" Source C is also another Textbook account of the events. It is almost in one respect like source A but is a lot shorter and could not be considered better but might help historian pin point events more accurately then source A could. Source D is a pictured diagram of the OK Corral and could be useful for historians to aid them with the location of the OK Corral. All sources apart from D would give a good view on law and order in particular a good example is Sheriffs source B says " I then walked through the OK Corral about fifty yards behind the Sheriff" The sources really do not give an insight into what people of today think about the OK Corral. Dates of the Textbook accounts could be taken into consideration as what we think today "Horan and Sann, A Pictorial History of the Wild West, Hamlyn 1954." OK Corral Assignment Two ?? ?? ?? ?? OK Corral: Assignment Two: Objective 2 & 3 ...read more.