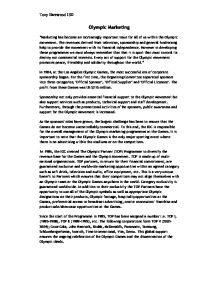 Olympic Marketing "Marketing has become an increasingly important issue for all of us within the Olympic movement. The revenues derived from television, sponsorship and general fundraising help to provide the movement with its financial independence. However in developing these programmes we must always remember that that it is sport that must control its destiny not commercial interests. Every act of support for the Olympic movement promotes peace, friendship and solidarity throughout the world." In 1984, at the Los Angeles Olympic Games, the most successful era of corporate sponsorship began. For the first time, the Organising Committee separated sponsors into three categories; "Official Sponsor", "Official Supplier" and "Official Licensee". The profit from these Games was US $215 million. ...read more.

This is a very unique benefit to Partners which ensures that their competitors may not align themselves with an Olympic team or the Olympic Games anywhere in the world. Category exclusivity is guaranteed world-wide. In addition to their exclusivity the TOP Partners have the opportunity to use all of the Olympic symbols as well as appropriate Olympic designations on their products, Olympic footage, hospitality opportunities at the Games, preferential access to broadcast advertising, on-site concession/ franchise and product sale/showcase opportunities at the Games. Since the start of the Programme in 1985, TOP has been assigned a number i.e. TOP I, (1985-1988), TOP II (1989-1992), etc. The following corporations form TOP V (2001-2004); Coca-Cola, John Hancock, Kodak, McDonald's, Panasonic, Samsung, SchlumbergerSema, Swatch, Time International, Visa, Xerox. ...read more.

The total revenue generated from the marketing of the Sydney 20000 was approximately US$3 billion (between 1997 and 2000), generated mainly through ticket sales, licensing and the sale of broadcasting rights in addition to sponsorship. Television Television broadcasting is integral to the success of the Olympic Games as it enables people around the world to watch the greatest sporting event. To this end the broadcast rights are critical to the Olympic Movement, not only in terms of revenue generated but also in terms of the number of countries and viewers. The Sydney 2000 Olympic Games was the largest TV operation in history. The Sydney Olympic Broadcast Organisation provided 3,500 hours of Olympic action covering more than 300 competition and ceremonial events. Images of Sydney 2000 reached 3.7 billion viewers in a record 220 countries. Broadcasting at Sydney 2000 accounted for 45% of all the revenue generated. Tony Harewood 13D ...read more.