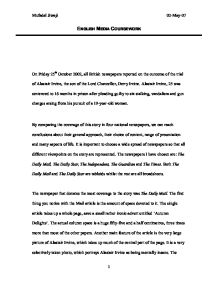 On Friday 25th October 2002, all British newspapers reported on the outcome of the trial of Alastair Irvine, the son of the Lord Chancellor, Derry Irvine.

ENGLISH MEDIA COURSEWORK On Friday 25th October 2002, all British newspapers reported on the outcome of the trial of Alastair Irvine, the son of the Lord Chancellor, Derry Irvine. Alastair Irvine, 25 was sentenced to 16 months in prison after pleading guilty to six stalking, vandalism and gun charges arsing from his pursuit of a 19-year-old woman. By comparing the coverage of this story in four national newspapers, we can reach conclusions about their general approach, their choice of content, range of presentation and many aspects of life. It is important to choose a wide spread of newspapers so that all different viewpoints on the story are represented. The newspapers I have chosen are: The Daily Mail, The Daily Star, The Independent, The Guardian and The Times. Both The Daily Mail and The Daily Star are tabloids whilst the rest are all broadsheets. The newspaper that donates the most coverage to the story was The Daily Mail. The first thing you notice with the Mail article is the amount of space devoted to it. The single article takes up a whole page, save a small rather ironic advert entitled 'Autumn Delights'. The actual column space is a huge fifty-five and a half centimetres, three times more than most of the other papers. Another main feature of the article is the very large picture of Alastair Irvine, which takes up much of the central part of the page. ...read more.

This is a classic example of the media affecting the news in a specific way for a specific purpose. The next paper to be studied is The Daily Star. The Daily Star is too a tabloid newspaper. The Daily star article although not as large as the Mail version is still as biased and emotive. The first thing to notice is the Daily Star is the only newspaper present that does not include the words 'Lord Irvine' or anything referring to the Lord in the headline. However, the Daily Star headline is much more vague and strong: 'Stalker son is jailed' At first glance, this may give us the impression that a son of a stalker has been imprisoned rather than a stalking son has been jailed. The picture shows Alastair looking remarkably depressed with the situation unlike the Daily Mail article. However, the caption under picture bares a likeness to the Mail's. The word 'caged' is used whilst in the Mail article the word 'Manacled' was used, both of these words are strong and give the impression that Alastair Irvine is some sort of trapped animal. The first paragraph, now, does describe who Alastair Irvine is. The words Lord Chancellor naturally arrive. The emotive word used in this paragraph is the use of the word 'love rival'. This gives us the impression of some sort of battle occurring between Alastair and his 'love rival'. ...read more.

The article is well structured with points interlinking from one to the other and the material covered is excellent with a wide range of points included that were not in other articles. The language is of a reasonable complexity and this also reflects the audience, which it is targeted at. Overall, the article is excellent apart from the few emotive words present, the strap-line's severity and the unnecessary size of the picture. In this essay, the void between tabloids and broadsheets has clearly been identified. From the extreme tabloid, which provides little useful information but much opinion of The Daily Mail to the extremes of broadsheet with a huge picture and lots of valuable information of The Guardian the progressive change of the articles has been highlighted. By personal favourite article is the Independent's, being not only informative but also not excessive. Its size is enough for a quick but in-depth guide to the article and does not detract from it with the suggestion of being a difficult read. However, each article has its own niche market, and I, cannot speak for the variety of people who belong to the readers of any of the newspapers. That is someway creates a sense of impartiality, however, being me alone it is all I can offer. In summate, if a variety of people from different cultures were to write this essay the result may be different, not in quality but in content. Mufadal Jiwaji 02-May-07 1 ...read more.