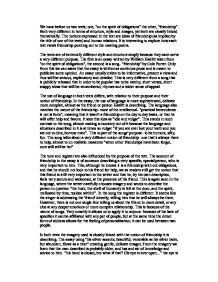 &quot;On the spirit of obligations&quot; and &quot;friendship&quot; - how each text views friendship pointing out to the meeting points.

We have before us two texts; one, "on the spirit of obligations" the other, "friendship". Both very different in terms of structure, style and images, yet both are closely linked thematically. The notions expressed in the text are ideas of friendship (as implied by the title of one of the texts) and human relations. It is interesting to explore how each text views friendship pointing out to the meeting points. The texts are of extremely different style and structure simply because they each serve a very different purpose. The first is an essay written by William Hazlitt taken from "on the spirit of obligations", the second is a song- "friendship" by Cole Porter. Only from this we can asses that the essay is written as continues prose and is meant to publicize some opinion. An essay usually exists to be informative, present a view and thus will be serious, explanatory and detailed. This is very different from a song that is publicly released that in order to be popular has to be catchy, short verses, short snappy ideas that will be remembered, rhymes and a wider sense of appeal. ...read more.

The account of friendship in the essay is of someone describing a very specific, special person, who is very important to him. This, although he knows it is a friendship with out obligations, and that he should not look to his friend for help, we as readers still get the notion that this friend is still very important to the writer and that he, by his own description, feels very secure and welcomed, at the presence of his friend. This is again seen in the language, where the writer carefully chooses imagery and words to describe the person in question "the husk, the shell of humanity is left at the door, and the spirit, mellowed by time, resides within!". In the song the register is different. It seems like the singer is addressing the 'friend' directly, telling him that he will always be there. However, there is not one single line telling us about the friend in more detail, or any clue at any deeper emotions or more complex relationship. ...read more.

All the imagery stands along the lines of 'if you need a hand when in trouble just call my name...', everything is to do with actions not words. Further more, all imagery is vulgar, everyday colloquial language, funny unreal situations. Is this the reflection of the friendship? I believe it is merely because of the appeal it has to have to the public. Thus we get imagery like "if they ever cook your goose, turn me loose". To conclude, I think the differences of the texts out-weigh the similarities, and that they are quite noticeable. I got the feeling that the essay is almost mocking the song and that in light of the essay it shows that the song has no real message or statement concerning friendship. It almost ridicules itself, the imagery and the rhymes flattening the notion of friendship making it something so explicit, so out of touch with reality and how friendships truly work, with all the subtleties. The song is there for the sake of entertainment alone. However, it interesting to see how in both texts the language, imagery and tone were so effected by the purpose. ...read more.