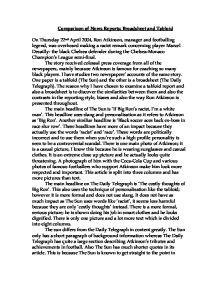 Comparison of News Reports: Broadsheet and Tabloid On Thursday 22nd April 2004, Ron Atkinson, manager and footballing legend, was overheard making a racist remark concerning player Marcel Desailly- the black Chelsea defender during the Chelsea-Monaco Champion's League semi-final. The story received colossal press coverage from all of the newspapers, mainly because Atkinson is famous for coaching so many black players. I have studies two newspapers' accounts of the same story. One paper is a tabloid (The Sun) and the other is a broadsheet (The Daily Telegraph). The reason why I have chosen to examine a tabloid report and also a broadsheet is to discover the similarities between them and also the contrasts in the reporting style, biases and also the way Ron Atkinson is presented throughout. The main headline of The Sun is 'If Big Ron's racist, I'm a white man'. This headline uses slang and personalisation as it refers to Atkinson as 'Big Ron'. ...read more.

It does not have as much impact as The Sun uses words like 'racist', it seems less harmful because they are only 'costly thoughts' instead. There is a more formal, serious picture; he is shown doing his job in smart clothes and he looks dignified. There is only one picture and a lot more text which is divided into eight columns. The sun differs from the Daily Telegraph in content greatly. The Sun only has a short paragraph of background information whereas The Daily Telegraph has quite a large section describing Atkinson's tributes and achievements in football. Also The Sun has much shorter quotes in its article. This is because The Sun is known to get straight to the point in articles whilst The Daily Telegraph usually gives all sides of the argument before coming to a conclusion. The Sun is part of the News Corporation Group owned by press baron Rupert Murdoch and is the best-selling British newspaper selling 3.5 million copies a day, compared to The Daily Telegraph who is part of Hollinger Inc. ...read more.

For example, the picture of 'Big Ron' standing there looking aggressive would make the readers instantly think that the racist comments he made must have been intentional. The tone of both papers is similar as racist language is considered politically incorrect by most political members. However, the headline in The Sun seems to attempt to persuade the reader that Ron Atkinson is not generally racist and this is a one-off incident that will not be repeated by Atkinson who is considered to not be racist. The Sun uses a more sensational style of reporting to appeal to its generally lower-class readership, whereas The Daily Telegraph is generally more serious in tone and uses more polysyllabic words to suit its more middle-class readership. To emphasise the point further The Daily Telegraph uses much more sophisticated language to appeal to its higher class readers whereas The Sun's lower-class readers would not appreciate this type of language and therefore prefer the less-sophisticated vocabulary. ...read more.