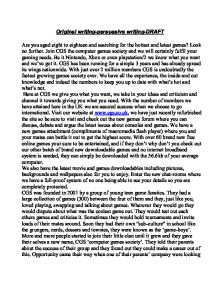 Original writing-persuasive writing-DRAFT Are you aged eight to eighteen and searching for the hottest and latest games? Look no further. Join CGS the computer games society and we will certainly fulfil your gaming needs. Be it Nintendo, Xbox or even playstation/2 we know what you want and we've got it. CGS has been running for a simple 3 years and has already spread its wings nationwide. With just over 2 million members CGS is undoubtedly the fastest growing games society ever. We have all the experience, the inside and out knowledge and indeed the numbers to keep you up to date with what's hot and what's not. Here at CGS we give you what you want, we take in your ideas and criticism and channel it towards giving you what you need. With the number of members we have attained here in the UK we are assured success when we choose to go international. Visit our website at www.cgs.co.uk, we have just recently refurbished the site so be sure to visit and check out the new games forum where you can discuss, debate and argue the latest issues about consoles and games. ...read more.

Soon they had their own "sub-culture" in school like the grungers, nerds, dossers and townies, they were known as the 'game-boys'. More and more people started to join their little clan until it grew and they gave their selves a new name, CGS 'computer games society'. They told their parents about the success of their group and they found out they could make a career out of this. Opportunity came their way when one of their parents' company were looking for a new business opportunity. The father pessimistically agreed to ask the company if they were willing to sponsor CGS, much to every ones surprise the company agreed. As you can imagine they were over the moon and CGS has been an absolute success ever since. The boys, who were at the time sixteen are now nineteen year old young men who are doing what they love and getting paid for it. This is every young game fanatic's dream and you can be a part of it. CGS is paving the way for young gamers giving you articles on careers in gaming...yes that's what I said, careers in gaming, from games tester to official games critic. ...read more.

visit the international centre of Nintendo in Tokyo, or you could win a trip to the XBOX party in London where you can test out there newest releases and get a wild goody bag, or you could even win a chance to come to CGS head quarters and interview our CEO and the founders of CGS. You must agree these prizes are undoubtedly cool! And you can enter, just simply log on to our website and subscribe to the new CGS magazine out on the thirteenth of September and with these few easy steps you could win one of these wicked prizes. As you probably have now established CGS is what everyone's talking about and a full platinum membership is definitely top dog this Christmas. So grandma, don't go and knit them a grotty, un-cool woolly jumper, simply log on to the CGS website and apply your grandkids to the platinum membership where they will be in with a chance of winning the top prizes, a full monthly subscription to the brand new CGS magazine and much, much more. For more details please contact us at our free call 24 hour hotline; 0800-477 477. CGS......EVERYONE'S TALKING ABOUT IT ...read more.