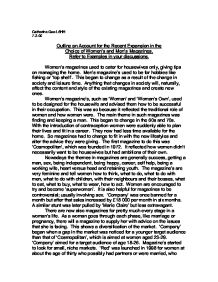 Outline an Account for the Recent Expansion in the Choice of Women&amp;#146;s and Men&amp;#146;s Magazines. Refer to Examples in your discussions.

Catherine Gee L6HH 7-2-00 Outline an Account for the Recent Expansion in the Choice of Women's and Men's Magazines. Refer to Examples in your discussions. Women's magazines used to cater for housewives only, giving tips on managing the home. Men's magazine's used to be for hobbies like fishing or 'top shelf'. This began to change as a result of the change in society and leisure time. Anything that changes in society will, naturally, affect the content and style of the existing magazines and create new ones. Women's magazine's, such as 'Woman' and 'Woman's Own', used to be designed for the housewife and advised them how to be successful in their occupation. This was so because it reflected the traditional role of women and how women were. The main theme in such magazines was finding and keeping a man. This began to change in the 60s and 70s. With the introduction of contraception women were suddenly able to plan their lives and fit in a career. They now had less time available for the home. So magazines had to change to fit in with the new lifestyles and alter the advice they were giving. The first magazine to do this was 'Cosmopolitan', which was founded in 1972. It reflected how women didn't necessarily want to be housewives but had ambitions of their own. ...read more.

This makes what the audience wants clearer and easier to provide for. Other magazines available for women are the gossip, weekly magazines like 'Bella' and 'Best'. These originated in Germany but were brought to this country, in 1987, when a gap in the market was spotted. They contain real life dramas, recipes, competitions and puzzles. These have changed since they first started as they didn't want long stories but that is no longer the case although a lot of the real life stories are quite short. Some of these don't feature celebrities as they focus more on 'real' people. Chequebook journalism is frequently used to get stories. Adverts appear at the end of real life stories offering money if the readers send in a story, more if they allow their photograph to be printed. These magazines go to the reader rather than letting the reader come to them. They are popular because they are cheap and allow the reader to drift off into other people's problems. Magazine's such as 'Woman' and 'Woman's Own' are more career orientated but are still in the same group. Teenage girls' magazines are very similar to women's magazines with similar front covers and content. There has been a change in the content since magazines such as 'Jackie' which specialised in boys and romance. ...read more.

In 1999 'Hello' paid �400,000 for an exclusive of James Major and Emma Noble's wedding. In the same year 'OK!' bought an exclusive of Victoria Addams and David Beckham's wedding. As well as men and women's magazines there are also special interest magazines dedicated to every fad going. From television-'Take a Break', to computers-'Official Playstation', to minority magazines-'Diva', to music-'Muzik', to tabloid types-'Now', to decorating-'House Beautiful'. Magazines can now be produced much more cheaply because of new technology so these magazines are now easier to produce. So it is easier to start up a magazine to supply the latest fad. Computer and Internet magazines are extremely popular so there are a lot of them about as there are 'clubbing' magazines to coincide with the fad of the so-called 'superclubs'. Advertisers like specific magazines as they know what type of audience they will be reaching and as there are so many magazines they can afford to go where is best for them so these magazines are likely to be successful as they have the support of advertisers. Very controversial magazines do not have this luxury, as advertisers don't like their products to be associated with such publications. Magazines have grown and developed so much in the last fifty years that where is there to go now? Will even smaller niche markets be targeted? Sales are likely to continue to rise and possibly the introduction of new men and women's magazines will increase. ...read more.