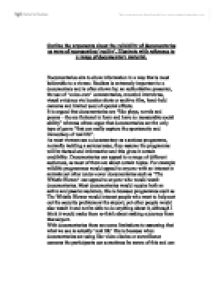 Outline the arguments about the reliability of documentaries as ways of representing 'reality'. Illustrate with reference to a range of documentary material. Documentaries aim to show information in a way that is most believable to a viewer. Realism is extremely important to a documentary and is often shown by; an authoritative presenter, the use of 'voice-over' commentaries, recorded interviews, visual evidence via location shots or archive film, hand-held cameras and limited used of special effects. It is argued that documentaries are "like plays, novels and poems - the are fictional in form and have no measurable social ability" whereas others argue that documentaries are the only type of genre "that can really capture the spontaneity and immediacy of real life". ...read more.

to help sort out the security problems at the airport, yet other people would also watch it and not be able to do anything about it, although I think it would make them re-think about making a journey from that airport. With documentaries there are some limitations to assuming that what we see is actually 'real life' this is because when documentaries are using like video diaries or surveillance cameras the participants can sometimes be aware of this and can act differently to how they would normally act if they didn't know the cameras were there, they could also show some biased opinions or exaggerate their actions, subconsciously or not. This suggests that documentaries with hidden/secret cameras may have more credibility as being 'real'. ...read more.

This documentary does, however, represent reality to some extent because they use secret footage of the police officers and have filmed them talking in real-life locations such as pubs, clubs, in the street and whilst travelling in a car, which shows a 'normal' world. Although many documentaries do portray certain features that question their representation of reality, other documentaries are clearly focused on showing things as close to the truth as possible. Feature documentaries such as one on animals and wildlife for example are well researched and their main aim is to simply inform the audiences rather that try to influence them in any way. Even though most documentaries try to portray as close to the truth as possible other motives behind the documentaries could suggest that they aren't, in fact as reliable or close to reality as they could be. ?? ?? ?? ?? ...read more.