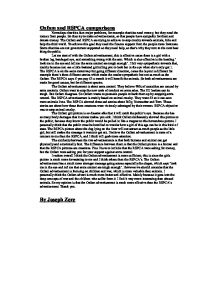 Oxfam and RSPCA comparisons Nowadays charities face major problems, for example charities need money, but they need the money from people. So they try to make advertisements, so that people have sympathy for them and donate money. The Oxfam and RSPCA are trying to achieve to stop cruelty towards animals, kids and help the third world. To achieve this goal they need the finance support from the people more fortunate. Some charities are not government supported so they need help, so that's why they turn to the next best thing the public. Let me start of with the Oxfam advertisement, this is effective cause there is a girl with a broken leg, bandaged eye, and something wrong with the arm. ...read more.

Oxfam want to stop the new code of conduct on arms sales. The EU leaders say its tough. But Oxfam disagrees. So Oxfam wants to persuade people to back them up by stopping arms control. The RSPCA advertisement is mainly based on animal cruelty. They want �3 so it can save more animals lives. The RSPCA showed three sad stories about Billy, Nutcracker and Tom. These stories are about how these three creatures were viciously sabotaged by their owners. RSPCA objective was to stop animal cruelty. The Oxfam girl picture is so disaster able that it will catch the public's eye. Because she has so many body damages that it almost makes you sick. ...read more.