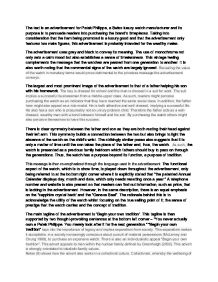 The text is an advertisement for Patek Philippe, a Swiss luxury watch manufacturer and its purpose is to persuade readers into purchasing the brand's timepieces. Taking into consideration that the item being promoted is a luxury good and that the advertisement only features two male figures, this advertisement is probably intended for the wealthy males. The advertisement uses grey and black to convey its meaning. The use of monochrome not only sets a calm mood but also establishes a sense of timelessness. This vintage feeling complements the message that the watches are passed from one generation to another. It is also worth noting that the commercial signs of the watch are largely ignored. Revealing the value of the watch in monetary terms would prove detrimental to the priceless message the advertisement conveys. ...read more.

This symmetry builds a connection between the two but also brings to light the absence of the watch on the child's wrist. The strikingly similar poses also suggests that it is only a matter of time until the son takes the place of the father and, thus, the watch. As such, the watch is presented as a precious family heirloom which fathers should buy to pass on through the generations. Thus, the watch has a purpose beyond its function, a purpose of tradition. This message is then re-emphasized through the language used in the advertisement. The functional aspect of the watch, which is to show time, is played down throughout the advertisement, only being referred to at the bottom right corner where it is explicitly stated that "the patented Annual Calender displays day, month and date, which only needs resetting once a year." ...read more.

There is also an individualistic appeal "Begin your own tradition". This advert appeals to men within the nuclear family defined by Greenhalgh (2002). This advert is strongly orientated to idealistic family values. Notes (9) shows how the advert also works in a collectivist culture. Collectivism, whereby the wellbeing of the group supersedes the wellbeing of the individual (Yeniyurt and Townsend 2003), is inferred by encouraging the individual to look after a watch (at his expense) for the wellbeing of his group. Thus, it is evident that the use of language complements the message conveyed by the father-son imagery. Cognitive dissonance The words "you never actually own a Patek Philippe" also reduce cognitive dissonance. Cognitive dissonance is often experienced after an expensive purchase (Lindsey-Mullikin 2003). After spending a considerable amount to purchase the watch the buyer might experience feelings of regret and guilt. However this potential cognitive dissonance is avoided with the knowledge that he does not own the watch, he looks after it for his son, ...read more.

This is a rather abrupt ending to the essay. It would be good to conclude by reiterating the overall appeal of the advert and where it would be published to reach the desired target audience.