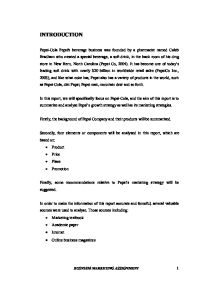 INTRODUCTION Pepsi-Cola Pepsi's beverage business was founded by a pharmacist named Caleb Bradham who created a special beverage, a soft drink, in the back room of his drug store in New Bern, North Carolina (Pepsi Co, 2004). It has become one of today's leading soft drink with nearly $20 billion in worldwide retail sales (PepsiCo Inc., 2003), and like what coke has, Pepsi also has a variety of products in the world, such as Pepsi-Cola, diet Pepsi, Pepsi max, mountain dew and so forth. In this report, we will specifically focus on Pepsi-Cola, and the aim of this report is to summarize and analyse Pepsi's growth strategy as well as its marketing strategies. Firstly, the background of Pepsi Company and their products will be summarized. Secondly, four elements or components will be analysed in this report, which are based on: * Product * Price * Place * Promotion Finally, some recommendations relative to Pepsi's marketing strategy will be suggested. In order to make the information of this report accurate and forceful, several valuable sources were used to analyse. Those sources including: * Marketing textbook * Academic paper * Internet * Online business magazines BACKGROUND Pepsi Co. is a Multinational corporation, which extends over many countries; Pepsi and Frito-Lay merged in 1960, which named the new company Pepsi Co. Besides, Pepsi Co. has merged with some other companies such as Gatorade, which became the world's fifth-largest food and beverage company with 15 brands. The company operates in a monopolistically competitive market, where its biggest competitor is Coca-Cola. Pepsi brand name and its strategic message 'it's the cola' have already penetrated the world market. In this case the brand name 'Pepsi' is very effective in differentiating its product from the others. Within the soft drink industry Pepsi is considered to be a middle class drink and Pepsi offers quality product that provides assurance to the public. ...read more.

PLACE Pepsi-cola as a famous brand is welcomed almost everywhere in the world and is well supported by millions of people.. Its beverage business contains North America and international. According to the statistics from the Australia Pepsi website, currently there are "more than 400 Pepsi-cola bottlers in the US and more than 600 internationally. The Pepsi-cola product is sold approximately about 195 countries and Territories" (PepsiCo Inc, 2004). The Pepsi Company manufactures and sells their products to the company they owned, and the independent bottlers that are franchised operating facilities through out the United States and Canada. Meanwhile, the PepsiCo also sell Pepsi-cola through the cooperation with other partners (PepsiCo Inc., 2004). The Pepsi website states that in 1992, a partnership agreement was formed by Pepsi-cola with Thomas J. Lipton Co, owner of the number one tea trademark in the US, and a distribution agreement was also entered with Ocean Spray, the number one non-refrigerated juice trademark in supermarkets (PepsiCo Inc., 2004). Other partners such as Pizza Hut, KFC and Hard Rock CAF� have partner relationship with Pepsi -cola. They receive support from PepsiCo and sell the product. The incentive for the PepsiCo is to extend their brand reputation in the whole world through those businesses, resulted in great sales. Normally, consumers can purchase Pepsi-cola from supermarkets, restaurant, KFC and Pizza Hut, which have partnership with Pepsi. Pepsi-cola brand is already been brought into the mind of the consumers as an invisible image. As the good reputation and image was created, Pepsi-cola almost exist anywhere and can be easily purchased by customers. In contrast, Pepsi-cola still need improvement for their market strategy in order to have an increase in their product sales. For instance, localization of Pepsi-cola in the limited area would limit the product sales volume and lower its profit. Pepsi-cola may try to establish better relationships with other fast food businesses such as MacDonald. ...read more.

Most people can link price with quality and the low-price may actually indicates poor quality and it could cause Pepsi to lose the business in the long run. If an advertisement that show Pepsi only allow excellent quality product to be sold to the consumers, it could alter the consumer's perspective on Pepsi (i.e. Pepsi offer excellent quality product only). Pepsi currently have contract with some fast food outlets to sell Pepsi products only, for examples, KFC, Pizza Hut and Taco Bell. These fast food restaurants are usually seen as lower to middle class restaurants and it could affect the brand name in the minds of consumers. However there are some small restaurants selling Pepsi when customer asks for it, it still doesn't change consumer's perspective of Pepsi. If a contract was written with smaller restaurant, such as a restaurant beverage must include all Pepsi products and not any of Pepsi competitor's products could improve Pepsi's image as a beverage provider for middle class families. Some recommendations for Pepsi are as follows: * Pepsi should increase its price to show it has high quality product. * Advertise that all Pepsi products must pass high standard, rigorous quality control tests and strict bottling procedures all over the world. * Pepsi should make contract with smaller restaurant as well instead of just fast food outlets. * Pepsi should sign contract with some small takeaways to buy Pepsi form Pepsi Co. directly as this could reduce the cost of both Pepsi Co. and the take way owner. However there are draw back for all of the recommendations, the higher price of Pepsi product could lead people to buy more coke as the soft beverage market is a highly elastic market, which means a small price change could lead to a large change in quantity demanded (Kotler, 2004 p.491). The advertisement showing Pepsi products pass high quality control could have some effect on consumer's perspective of the product Pepsi; however excess advertising of this could be a major expenditure for Pepsi with limited effects, especially in a large economy that is in recession such as America. ...read more.