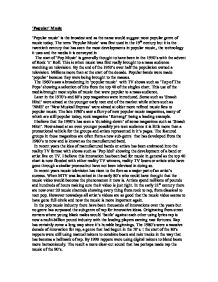 'Popular' Music 'Popular music' is the broadest and as the name would suggest most popular genre of music today. The term 'Popular Music' was first used in the 19th century but it is the twentieth century that has seen the most developments in popular music., the technology it uses and the media it is conveyed in The start of 'Pop Music' is generally thought to have been in the 1950's with the advent of Rock 'n' Roll. This is when music was first really brought to a mass audience watching on television. By the end of the 1950's over half the population owned a television. Millions more than at the start of the decade. Popular bands were made 'popular' because they were being brought to the masses. The 1960's saw a broadening in 'popular music' with TV shows such as 'Top of The Pops' showing a selection of hits from the top 40 of the singles chart. This use of the media brought most styles of music that were popular to a mass audience. ...read more.

I believe this innovation has been bad for music in general as the top 40 chart is now flooded with either reality TV winners, reality TV losers or artists who have gone through a similar process but have not been televised in doing so. In recent years music television has risen to the fore as a major part of an artist's success. When MTV was launched in the early 80's who could have thought that the music video would become the phenomenon it now is. Artists spend millions of pounds and hundreds of hours making sure their video is just right. In the early 21st century there are now over 20 music channels showing every thing from rock to rap, from classical to teen pop. However nowadays all artist's videos are so good that the music video seems to have gone full circle and now the music is more important again. In the pop music industry there have been thousands of innovations over the years but no genre has surpassed the sub genre of rap for innovative ideas. ...read more.

However there is one dark cloud that looms over the organisations that run the music industry such as record labels and the media. The Internet. Technology has now come so far that music files can now be swapped over the Internet through such software such as 'Napster' or 'Kazaa'. Now when a teenager hears a song he or she likes on the radio they don't rush to the record store. They rush to their computer. It is not just teenagers either. Millions of adults indulge in this type of music piracy every day. Even though they are ripping off the very artists they love. I believe however that the problem is not with the designers of 'Kazaa' or with the people who are downloading it. After all millions of people use these services, law abiding ordinary people. The reason for this I believe is because people see record companies as big faceless corporations who don't really care about music or people, just making money. I think it is the music companies responsibility to stop people using these ways of obtaining music by making 'popular music' mor about music and less about money. ...read more.