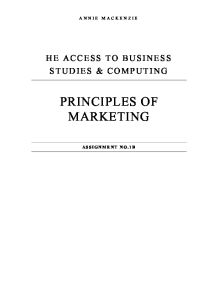 ANNIE MACKENZIE HE ACCESS TO BUSINESS STUDIES & COMPUTING PRINCIPLES OF MARKETING ASSIGNMENT NO.1B DAVID LLOYD LEISURE CLUBS David Lloyd is a health and fitness operation that is owned by Whitbread PLC, the UK's leading leisure company. With 55 clubs and over 285,000 members, David Lloyd is one of the most successful businesses in the health and fitness club industry. David Lloyd has been operating successfully in the UK for nearly 20 years and has unrivalled expertise within the health and fitness sector. I have chosen to concentrate on the David Lloyd leisure club situated in Knole Road, Bournemouth. SWOT ANALYSIS STRENGTHS > Company Image David Lloyd has a bold company image and good reputation due to its nationwide success. By providing a consistently high level of service to its members and offering a full range of classes and leisure programmes, David Lloyd has made an excellent name for itself. According to an Omnibus report commissioned at the end of 2000, David Lloyd Leisure is in the enviable position of being the UK's best-known health and fitness club brand. > Endorsement David Lloyd has sought to offer its members the very best equipment available by joining forces with the following well known sports brands: The European swimwear brand Arena has a partnership deal with David Lloyd, which includes the full branding of the poolside area and lifeguard uniforms. Arena has also bought David Lloyd the Nick Gillingham swim fitness programme, which gives the club a competitive distinction from its competitors. The Italian sports and leisurewear brand Ellesse provides endorsement to David Lloyds racket couches. & Slazenger and Dunlop are both big names in the world of tennis, with Slazenger being the sponsor of Wimbledon since 1902. Together these two brands are the official tennis ball suppliers to David Lloyd. Mitre, the well known sporting goods and footwear company are currently the official footwear supplier to the fitness teams at all of the David Lloyd clubs. ...read more.

The following facilities are available at Bournemouth: Racquets 5 Championship Squash Courts, Wooden Sprung Badminton Courts Gym State of the Art Gymnasium, Fixed Weight Machines, Free Weight Apparatus, Life Fitness Cardiovascular Equipment, Stretch Zone, Swiss Ball/Bosu Area, Fitness Testing, Free Health & Fitness Assessment and Personalised Programme, 2 Aerobics Dance Studios Swimming Pool Heated Indoor Pool, Spa, Sauna, Steam Room, Cold Plunge, Ladies and Men's, Sun beds Cafe Bar Club Bar, Restaurant, Lounge, Snooker Area, Sports Lounge, Sky Digital Widescreen Television Childcare Cr�che, High 5 Children's Club (age 0 - 17) Other Unisex Hair Salon, Beauty Therapy Salon, Conference Room. > PRICE The various membership options available are priced relative to the facilities offered by each. It is important that the prices and facilities offered by local competitors are regularly monitored to ensure the company does not lose out to competitors. As well as ensuring the prices are reasonable, it is important to the company to use discounts and price reductions as an added incentive during promotional periods. An example of this is waiving the joining fee or offering reduced membership rates for students. It is important for David Lloyd to price its service competitively but to also remain profitable. > PROMOTION David Lloyd benefits from being part of a nationwide chain of health and fitness clubs. This provides the business with vital publicity that smaller local competitors may not benefit from. Due to the size of the company and the increased level of capital available, David Lloyd is able to sponsor many sports teams around the country, which provides valuable publicity. As the health and fitness sector is a very competitive industry limited availability, each health and fitness club is in direct competition with others in the local area. Taking this into account, it is necessary for David Lloyd to promote itself in order to attract new members and retain existing ones. Promotion is important to reassure customers of the differences between David Lloyd and its competitors. ...read more.