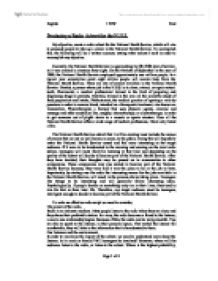 Producing a Radio Advert for the N.H.S.

Producing a Radio Advert for the N.H.S. My objective, create a radio advert for the National Heath Service, which will aim to persuade people to take up a career in the National Health Service. To accomplish this, the following will be a written account, stating what actions I took in order to accomplish my objective. Currently, the National Health Service is approaching its fifty fifth year of service, as it was created in nineteen forty eight. On the thirtieth of September in the year of 1999, the National Health Service employed approximately one million people. In a typical year seventy-two point eight million people will receive help from the National Health Service. There are lots of careers available in the National Health Service: Dentist; a person whose job in the N.H.S. is to clean, extract, or repair natural teeth, Pharmacist; a medical professional trained in the field of preparing and dispensing drugs to patients, Dietitian; trained in the area of, the scientific study of food preparation and intake, Phlebotomist; the medical practice of opening a vein by puncture in order to remove blood, intended as a therapeutic treatment, also known as venesection, Physiotherapist; a therapy that uses physical agents, exercise and massage and other modalities like, surgery, chemotherapy, or electrotherapy, in order to get someone out of plight: strain to a muscle or sprain etcetera. ...read more.

However, that is to an advantage, research proves that radio adverts are particular effective at stirring our emotions. Adverts that are factual, clear, informational and concise are considered to be the least appealing. But, the above can be effective only if it is used in such a way in order to affect us emotionally, make us visualize what is happening in the advert. Creating a story with characters, Radio tends to be about real life stories, generally, people like a story and effective radio adverts will dramatise a story. Engaging the audience by involving an aspect of their life on the radio, then they will be identifying with the person on the radio. Characters must sound real; they cannot speak like an answering machine. The audience must know that characters are real, even though they may not be. Dialogue is the main article that will accomplish this. Focussing on a single message, For an advert to be effective in does not want to have more than one message. Adverts do not want to be complicated, the listener may not have the academic ability to unravel the message within and therefore the advert will not be successful. Also, adverts must not be boring or drag on; thirty to sixty seconds should be enough, in order for the message to be carried across. ...read more.

Sound effects was used in order to set the scene and it felt appropriate to use it because, when you here the mobile ring in that way, firstly; you think 'its another mobile phone advert', secondly; you think 'ah that's the man with the mobile'. Creating a sort of comfort or humour, for example, 'what's to come?'. Finally, the National Health Service's slogan was used for ending, because, it sums up the advert and creates a similarity between all advert. My wok will entertain to some extent, but I do not have a good imagination for coming up with completely unique adverts. It is relevant to the National Health Service because, it outlines the problems with the shortages of doctors and it expresses that we need more people to join. It should engage the audience because, the mobile phone man should help to do that but the dialogue from the mobile phone man actually engages the audience. They will feel rewarded by it and they should remember it because, the endnote is a sort of a summary and then therefore will attract then and make them feel a sense of congratulations. Overall the single message stands out, 'the NHS needs you'. English 11NW Fred Page 1 of 4 ...read more.