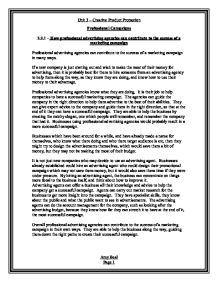 Professional Campaigns 2.2.1 - How professional advertising agencies can contribute to the success of a marketing campaign Professional advertising agencies can contribute to the success of a marketing campaign in many ways. If a new company is just starting out and wish to make the most of their money for advertising, then it is probably best for them to hire someone from an advertising agency to help them along the way, as they know they are doing, and know how to use their money to their advantage. Professional advertising agencies know what they are doing. It is their job to help companies to have a successful marketing campaign. The agencies can guide the company in the right direction to help them advertise to the best of their abilities. They can give expert advice to the company and guide them in the right direction, so that at the end of it they can have a successful campaign. They are able to help the business by creating the catchy slogan, one which people will remember, and remember the company that had it. Businesses using professional advertising agencies would probably result in a more successful campaign. Businesses which have been around for a while, and have already made a name for themselves, who know what there doing and who there target audience is etc, then they might try to design the advertisements themselves, which would save them a bit of money, but they may not be making the most of their budget. ...read more.

Radio is supposed to be four times more successful, in the long term at generating a message than TV so radio might be quite a good form of advertising for a company to use. Like TV, it is important that your message gets heard by the right people at the right time. There is no point paying lots of money to have your advert heard by young people if it is played during the day, when perhaps they will be at school. Internet: There are quite a few forms of internet advertising, such as the companies own website, pop-up ads for their company which could appear on someone's screen when they reach a certain website, or emails which the company send out to people on their 'mailing list'. A mailing list is basically a database of customers which a company has, to which they send out the products or offers, on a set basis (for example, every week or every month). These customers receive the latest information first hand, before everyone else gets a chance to. Websites are a good way for a company to advertise their business, as it is available to the whole world, so any one could see about their company. Internet is becoming very popular, and it will soon take over other forms of printed media (such as leaflets and flyers). It costs a lot of money to set up properly on the internet, but when it is done, there will be a lot of benefits from the main cost start up costs. ...read more.

Saves the company time By using a professional agency, a business can save a lot of time. Disadvantages: Cost a lot of money Using a professional agency to help promote a product costs a lot of money, and sometimes companies do not have that amount of money to spend on promotional campaigns. Part of this could be an advantage, as although they are costing a lot of money, they could attract a lot more customers, than if they designed the promotional campaign themselves. Might not turn out how expected There is always a risk involved in getting someone else to design a promotional campaign for you, and it might not turn out how you wanted it to. Might not get a full understanding of what goes on inside the business as they are external to the business. You might not get what you want out of the promotional campaign. The advertising agents could change something to the way they want, but it turns out wrong, so the company do not get what they ask for, and the agents messed up. EXPLAIN! Might provide the same service to competitors The agency might give two companies the same information and this would result in two competitive companies having very similar advertisements, which would not help with competition, as the public would not know what was going on with the promotions. Vital information may be given away The advertising agent might accidentally give away important information to a competitive company. ?? ?? ?? ?? Unit 3 - Creative Product Promotion Amy Beal Page 1 ...read more.