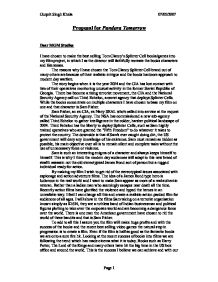 Proposal for Pandora Tomorrow Dear MGM Studios I have chosen to make the best selling Tom Clancy's Splinter Cell books/games into my film project, in which I as the director will faithfully recreate the books characters and likenesses. The reasons why I have chosen the Tom Clancy Splinter Cell brand out of many others are because of their realistic intrigue and the books hardcore approach to modern day warfare. The story begins when it is the year 2004 and the CIA has lost contact with two of their operatives monitoring unusual activity in the former Soviet Republic of Georgia. There has become a rising terrorist movement, the CIA and the National Security Agency call on Third Echelon, a secret agency that deploys Splinter Cells. While the books concentrate on multiple characters I have chosen to base my film on one and that character is Sam Fisher. Sam Fisher, an ex-CIA, ex-Navy SEAL who's called into service at the request of the National Security Agency. The NSA has commissioned a new sub-agency called Third Echelon to gather intelligence in the colder, harsher political landscape of 2004. Third Echelon has the liberty to deploy Splinter Cells, such as Sam highly trained operatives who are granted the "Fifth Freedom" to do whatever it takes to protect the country. The downside is that if Sam's ever caught doing dirt, the US government will deny any knowledge of his existence. Sam must remain as hidden as possible, his main objective over all is to remain silent and complete tasks without the use of unnecessary force or violence. Sam is such an interesting enigma of a character and always keeps himself to himself. ...read more.

Camera-changes to a medium shot. Guards come running out from the burning buildings and shelter behind fallen debris from what seems to be something in the distance. They scan the landscape for something. Camera-pans across guards from close range making their facial expressions apparent. Then changes to a medium shot from a straight on angle showing them looking into the distance. The guards incoherently speak amongst themselves. Guard 3: Something or Someone is out there! Sound-Soundtrack to the film plays, 'X gon give it to ya' by DMX. Song starts off slowly and softly. Camera-extreme close up of guards face The guards face seems tense and we see that he is scared and fearful. He looks into the camera. Guard 4: What the Hell! Camera-cuts to a medium shot The guard has been impaled by some sort of large metal spike that has been thrown at him. Sound: song 'X gon give it to ya' ends here. Sound-Loud screeching noise like a chalk board being scratched is heard as the metal spike pierces the guard's body and the guard is heard screaming in agony. Guard 4: Arghhhhhhhhhh! Camera-closes in on the guards face as a Close up shot is used. Sound-slow sad music is played. We see the guards sunglasses fall off and see the extent of the pain in his eyes as he continues to scream for help, the other guards try in vain to help him. The guard falls to his knees and sheds a tear before he takes his last gasp for air. Camera-Screen blacks out as the guard dies. Camera-cuts to the other heavily armed guards in a medium shot from a low angle. ...read more.

Sound again is used to suspense the audience as tension building music plays softly in frame 5 just teasing the audience as if maybe another event like the explosion will occur. An extreme close up on the guards face is very effective as it shows his facial expressions and make the audience believe his emotion fully. This is effectively used in frames 6, 9, 10 and 12. I have continued to use high angles looking down on the guards to make them seem weak and that they are being watched. In frame 8 the song 'Bad boys 4 life' is used to make the guards seem ruthless in there quest to kill the mysterious person who is hunting them. This also firmly establishes them as the heel characters. Lighting is also used to effect throughout especially in frame 10 where it is used to show the guards face and coincided with the sad music we as an audience even though we know these guards are the bad guys feel sorry for them. Finally in the last scene we still don't get to see the man who is hunting these guards only his hand and gun, this will keep the element of intrigue and willingness to see who the character is. At the end Sam says 'Boo' at this point the comical side of the story appears and the audience find out that all along it was a human. As the screen fades out and we hear gun shots the humour is immediately taken away from the scene and this again reassures the audience that they are watching a realistic action adventure. Gurprit Singh Khela 07/05/2007 Page 1 ...read more.