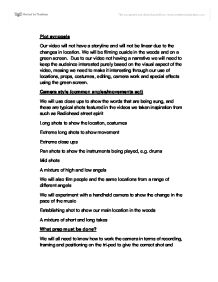 Our video will not have a storyline and will not be linear due to the changes in location. We will be filming ouside in the woods and on a green screen.  Due to our video not having a narrative we will need to keep the audeince interested purely based on the visual aspect of the video, meaing we need to make it interesting through our use of locations, props, costumes, editing, camera work and special effects using the green screen.

We will use close ups to show the words that are being sung, and these are typical shots featured in the videos we taken inspiration from such as Radiohead street spirit

Pan shots to show the instruments being played, e.g. drums

A mixture of high and low angels

Establishing shot to show our main location in the woods

A mixture of short and long takes

We will all need to know how to work the camera in terms of recording, framing and positioning on the tri-pod to give the correct shot and angle

We will limit the style of cuts inbetween shots to keep our video simple and fitting with the alternative rock genre, cutting from shot to shot should not be noticable to make the edting seem fluid and almost invisible.

We will need to edit the footage to make it black and white or grey scale, as well as playing with brightness/contrast, hue/saturation and shadow to get the correct effect, and filming origianally in a brightly lit place will make this more effective.

Our location will be outside and on green screen. We want a simple location similar to the trailer park in the Street Spirit video, so we have decided to film in the woods near a bridge. The bridge/tunnel will also create a similar lighting effect seen in The Smashing Pumpkins video Disarm- with a dark tunnel which is brightly lit by natural light at the end. As we are filming outside the bridge is also useful as weather conditions  may effect filming, e.g continuity, so we can film underneith it if needed. Our second location will be filming on a green screen which will allow us to play with special effects and a number of different locations/backdrops.

We will each have two different costumes to wear in the two different locations (outside and greenscreen) which is fitting the the genre as the band members do not often change costume. Our costumes need to be effective on screen after editing so we will all be wearing black,white or grey. Having only one outfit change will help to ensure continuity.

The props we will be using are a guitar, drum kit and some silver gymnast style ribbons on sticks. The instuments are key to the genre of close ups of the artists playing them are often shown. The silver ribbons will look effective on screen when the footage is played backwards which was also inspired by the video Disarm, the  silver ribbons themselves having been inspired by Red Hot Chili Peppers- Give it Away as the artists are wearing silver body paint.  Props that won't appear on screen will be something which we can mark the ground with to mark each of our positions in shots where we are all on camera and appear a certain disatnce apart, to ensure that each time we film we are stood in the same place.

The make up will be as natual as possible in our video and the lighting will be bright and natual when we film outside, and we will use spotlights when filming on green screen to eliminate any shadows which will be hard to cover when editing the background.  Bright lighting ensures the best images and gives us the freedom to add more shadow if needed when we edit and add effects.

We need to pick a day when the weather is appropriate for us to film outside. We must try on our outfits and see how they look on screen as well as taking photos of ourselves in costume to ensure the continuity of the way we look.  To film on green screen we need to get permission to use an appropriate room within the college and get all of the equipment together. We must take time into consideration as we are filming outside and for some reason the location may not be a reasonalble place to film, may have to film elsewhere, as it is a pulic place there may be other people around that could interfear with filming.

We also need to find a way of playing the track while we film e.g speakers or a phone to ensure that the mouth movements will be in sync with the words once we put the footage onto the computer

Lewis needs to learn the lyrics to the song