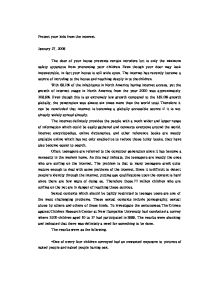 Protect your kids from the internet

Protect your kids from the internet. January 27, 2006 The door of your house prevents certain intruders but is only the minimum safety apparatus from preventing your children. Even though your door may look impenetrable, in fact your house is still wide open. The internet has recently become a source of intruding to the house and reaching deeply in to the children. With 68.1% of the inhabitants in North America having internet access, yet the growth of internet usage in North America from the year 2000 was approximately 108.9%. Even though this is an extremely low growth compared to the 182.0% growth globally, the penetration was almost six times more than the world total. ...read more.

As this may indicate, the teenagers are mostly the ones who are surfing on the internet. The problem is that to many teenagers aren't quite mature enough to deal with some problems of the internet. Since it is difficult to detect people's identity through the internet, putting age qualifications upon the content is hard since there are few ways of doing so. Therefore those 77 million children who are surfing on the net are in danger of reaching these sources. s****l contexts which should be tightly restricted to teenage users are one of the most challenging problems. These s****l contexts include p*********y, s****l abuse by others and others of these kinds. ...read more.

*One in 33 had an aggressive s****l solicitation, where they were asked to meet somewhere, were asked for their phone number or address, or were sent money or gifts as an enticement to meet away from home. *Only 3 percent of the children told their parents about it. And they probably didn't because they were afraid their parents would take away their Internet access. Not to mention, this survey was conducted 6 years ago, and since then the usage of internet has grown exponentially. The facts that the internet has no boarders between countries or language, since it is afforded in every language, is the biggest attraction as well as the biggest problem as it becomes a global issue rather than a issue of one nation. Due to this often it is hard to find and punish the people responsible for crimes through the internet. ...read more.