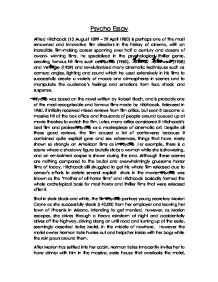 Psycho Essay-Shower Scene Analysis. Shot in stark black and white, the film Psycho portrays young secretary Marion Crane as she successfully steals $ 40,000 from her employer and leaving her town of Phoenix in Arizona, intending to get married.

Psycho Essay Alfred Hitchcock (13 August 1899 - 29 April 1980) is perhaps one of the most renowned and innovative film directors in the history of cinema, with an incredible film-making career spanning over half a century and dozens of award- winning films. He specialized in the psychological thriller genre, creating famous hit films such as Psycho (1960), North by North-west (1958) and Vertigo (1959) and revolutionized many cinematic techniques such as camera angles, lighting and sound which he used extensively in his films to successfully create a variety of moods and atmospheres in scenes and to manipulate the audience's feelings and emotions from fear, shock and suspense. Psycho was based on the novel written by Robert Bloch, and is probably one of the most recognisable and famous films made by Hitchcock. Released in 1960, it initially received mixed reviews from film critics, but soon it became a massive hit at the box office and thousands of people around queued up at movie theatres to watch the film. Later, many critics considered it Hitchcock's best film and praised Psycho as a masterpiece of cinematic art. Despite all these good reviews, the film caused a lot of controversy because it contained quite explicit gore and s*x references, things that have rarely shown so strongly on American films as in Psycho .For example, there is a scene where a shadowy figure brutally stabs a woman while she is showering, and an embalmed corpse is shown during the end. Although these scenes are nothing compared to the brutal and overwhelmingly gruesome horror films of today, Hitchcock still struggled to get his whole film released due to censor's efforts to delete several explicit shots in the movie. ...read more.

After Marion leaves the room, Norman stands up and starts chewing some gum. His mood and personality has changed dramatically; he is suddenly more relaxed and casual, contrasting with his nervous and edgy temperament that he had when Marion was in the parlour. Walking towards the counter and picking up the ledger, the audience notice how confident he has become, and wonder what the reason is. He opens the ledger and the camera shows a close-up of what he's reading- the fake name that Marion wrote on her arrival to the motel- and then switches back to his face, while he shows a slight smirk at the false name and location. Then, he slowly walks back into the dark shadowy parlour, his face and body covered in darkness, and stops before a wall, momentarily surrounded by large, sinister birds of prey. The audience can see that he is trying to listen to what's happening next door, and then removes a painting on the wall that separates the parlour from Cabin Room 1 where Marion is staying to reveal a small jagged peephole cut into the wall, a beam of bright light coming from it. Peering into the small hole, it is revealed to Norman that Marion is undressing to take her shower. Hitchcock uses a point-of-view shot with the camera to show to the audience exactly what he is seeing, and they feel uncomfortable to be put in a position where they can spy on Marion. Next, the camera switches to an extreme close-up of Norman's face, filling the screen with just his unblinking eye, which is illuminated slightly due to the hole. ...read more.

It gradually became higher and louder as the murder goes on, accentuating the heightening horror of the scene, but then goes very melancholy and slow as Marion is left to die in the bathroom, signifying the last few moments of her life. It stops altogether after she falls over and breaks the shower curtain, and the only sound left in the scene is the splash of water from the shower falling on the bathtub. Sound effects also added to the horror. For example, the sickening sound of the knife slashing through Marion's skin is very audible; giving the audience impressions that the cuts are very deep (the sound was actually made by stabbing melons with a knife) By exposing the audience to forty-five seconds of nonstop violence without actually showing any gore or blood, Hitchcock leaves it up to our imagination. Imagination has no limits which is why the scene is timeless and just as shocking half a century later. The shock is not only the sudden bombardment of cuts but the fact that he killed off his leading lady. We looked through her eyes, listened to her thoughts and witnessed her actions only to see her naked body slashed to an ugly death. With more than an hour to go, anything is possible. Even though the film had a low budget, and the props used in the shower scene were quite crude and unsophisticated (although it was 1960, and special effects weren't really used in films back then) Hitchcock uses his technical mastery of cinematic techniques to make the shower scene and the whole movie one of the most famous in film history. ...read more.