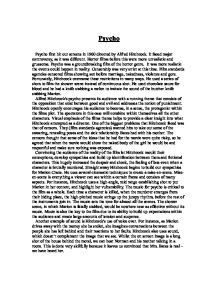 Psycho first hit our screens in 1960 directed by Alfred Hitchcock. It faced major controversy, as it was different. Horror films before this were more unrealistic and gruesome. Psycho was a groundbreaking film of the horror genre

Psycho Psycho first hit our screens in 1960 directed by Alfred Hitchcock. It faced major controversy, as it was different. Horror films before this were more unrealistic and gruesome. Psycho was a groundbreaking film of the horror genre. It was more realistic the events could happen in reality. Censorship was very strict at this time. Film standards agencies censored films showing s*x before marriage, nakedness, violence and gore. Fortunately, Hitchcock overcame these restrictions in many ways. He used a series of shots to film the shower scene instead of continuous shot. He used chocolate sauce for blood and he had a knife stabbing a melon to imitate the sound of the butcher knife stabbing Marion. Alfred Hitchcock's psycho presents its audience with a running theme that consists of the opposition that exist between good and evil and addresses the notion of punishment. Hitchcock openly encourages his audience to become, in a sense, the protagonist within the films plot. The spectators in this case will combine within themselves all the other characters. Visual emphasis of the films theme helps to provide a clear insight into what Hitchcock attempted as a director. ...read more.

Each time a character is killed, when the murderer emerges from their hiding place, the high-pitched music strings up the jumpy rhythm, before the rest of the instruments join in. The music sets the tone for almost all the scenes. The shower scene, in which Marion is fatally stabbed, would be nowhere near as effective without its music. Music is also the key to the film due to its ability to build up expectations within the audience and create large amounts of tension and suspense. Another example of sound is Hitchcock's use of voice over. For instance, as Marion drives away with the money she ha stolen, she imagines conversations between the people she has left behind and their reactions to her faults. Hitchcock also uses sound, which doesn't complement the image that we see. Whilst the on screen image is a long shot of the house behind the motel, we can hear Norman and his mother talking in a room. This is done very skilfully because it leaves us convinced that Mrs. Bates is real - we have heard her. ...read more.

Hitchcock set the main plot for Psycho in a spooky, dark motel to create a nail biting atmosphere. Alfred J. Hitchcock wanted to conquer the horror genre so he skilfully chose the perfect setting for every crime to create suspense and terror between the audiences. He accomplished this through Psycho by setting the scenes in the perfect places, this left very long lasting effects on the audience. In addition, because Psycho was filmed in black and white, this helped it look even spookier and it was extremely effective. Through his clever techniques, Hitchcock managed to pass 'Psycho' as one of the greatest horror movies of the era but also made himself a successful career. (Psycho was filmed in black and white for the usage of special effects e.g. chocolate sauce as blood). After analysing Psycho I have come to believe it's one of the most impressive horror film to date. Considering there wasn't much technology in the early sixties, not many directors have to this day achieved what Hitchcock acomplished forty-five years ago. Through careful direction and shooting Psycho was able to build tension and suspense, it was able to create emotions between the spectators and give edge of the seat excitement. It truly is pure quality. ...read more.