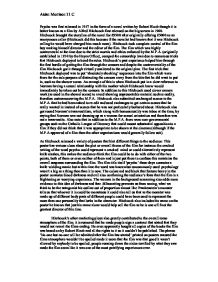 Psycho. Hitchcocks ingenuity did not stop at his ability to get round the censors but he was also a master at creating suspense, horror and making his films unpredictable.

Psycho was first released in 1957 in the form of a novel written by Robert Bloch though it is better known as a film by Alfred Hitchcock first released on the big screen in 1960. Hitchcock brought the storyline of the novel for �9500 after originally offering �5000 as an anonymous caller (Hitchcock did this because if the novelist had known that it was Hitchcock calling he would have charged him much more). Hitchcock took complete control of the film buy making himself director and the editor of the film. The film which was highly controversial at the time due to the strict morals and ethics enforced by the M.P.A. (originally established in 1930 by the Hayes Office), escaped the censorship laws due to numerous tricks that Hitchcock deployed to bend the rules. Hitchcock's past experience helped him through the first hurdle of getting the film through the censors and despite the contreversiality of the film Hitchcock got it through virtually unaltered to the original plan. The first trick that Hitchcock deployed was to put 'absolutely shocking' sequences into the film which were there for the sole purpose of distracting the censors away from the bits that he did want to put in, such as the shower scene. An example of this is when Hitchcock put in a clear reference to Norman having a s****l relationship with his mother which Hitchcock knew would immediately be taken out by the censors. In addition to this Hitchcock used clever camera work (as used in the shower scene) to avoid showing unpresentable material such as nudity, therefore outmanoeuvring the M.P.A.. Hitchcock also submitted unchanged scenes to the M.P.A. that he had been asked to re-edit and used exchanges to get certain scenes that he really wanted in instead of scenes that he was not particularly bothered about. Hitchcock also got round Norman's transvestitism, which along with homosexuality was taboo at the time, by saying that Norman was not dressing up as a woman for s****l orientation and therefore was not a transvestite. ...read more.

He defends her by saying arguably the most ironic line in the film, 'It's not as if mother were a maniac a raving thing. She just goes a little mad sometimes. We all go a little mad sometimes. Haven't You? Norman also suggests that 'mother' is completely harmless. The fact that Norman is readily discussing mother and has had a conversation with her (albeit out of sight) means that we are not at all expecting for Norman to be 'mother'. Neither is we expecting mother to go and kill anyone because she is supposedly harmless. The mise en scene of this particular scene is very interesting there are two birds of prey there (the owl and the crow) which both represent death. The birds are also stuffed to keep them new, the same as he has done to his mother. This is one of the most meaningful and ironic mise scenes that is seen through the whole film. The position of the birds is also particularly interesting they are towering over Marion suggesting perhaps that death is going to come to her soon, although at the time we do not notice this or think it through enough to guess that she is going to get killed. The most time consuming horrific and to some the most important scene in the film is to follow. After a slow down in tempo of the film the audience is feeling pretty relaxed, after the voyeuristic shot of Norman peeping through a hole in the wall (voyeurism being something that Hitchcock seems to be particularly obsessed with, and being used to perhaps suggest that he may be doing something that has been shown in the second film under more lax censorship rules), the audience will be utterly shocked. The part of the film that is most shocking and horrific scene in the film (and some would say in any film) ...read more.

The first way that Hitchcock did this is by positioning the camera at one point as though we are looking through Norman's eyes this helps us take Norman's side and so we will the car to sink. The other reason is that we feel sorry for Norman who at this stage in the film seems to be dominated by a madwomen who will not allow him to do anything. We also do not particularly want mother to be caught as she is mentally ill and so it seems unlikely that she would have done it of her own accord. We also feel that even if Norman did report it to the police they would immediately think it was him rather than a frail old women. It is also just a boy trying to protect his mother. The film at its time was the scariest thing most people had saw; however today audience have been desensitizes by the amount of horror and thriller films around today. We don't get hit with the same impact the audience of the 1960's did as it was a new idea which broke conventions and even created same more setting a standard for all horror-thriller films. I think that the film wasn't scary as I am a member of today's desensitized audience however my heart did jump when the stabbing violin combined superbly with the on-screen action. Throughout the film there is transference is guilt for example Marion's guilt being replaced by Norman's guilt, innocent characters failings are magnified. Hitchcock also shows things to the audience that the characters don't know then builds tension around what will happen when the characters the characters find out. The plot also revolves around the money which incites curiosity, desire and motivates the characters. The money however never leaves Marion though audience and characters think that he'd killed her for the money. Hitchcock preferring suspense over surprise, hence the title master of suspense. All of this comes together to make psycho a truly frightening experience for the audience of the time. ?? ?? ?? ?? Aidan Morrison 11 C ...read more.