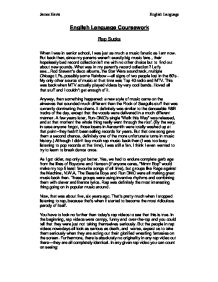 English Language Coursework Rap Sucks When I was in senior school, I was just as much a music fanatic as I am now. But back then, since my parents weren't exactly big music fans, their hopelessly bad record collection left me with no other choice but to find out about new sounds. What was in my parent's record collection? Let's see...Rod Stewart's disco albums, the Star Wars soundtrack, multiple Chicago LPs, possibly some Rainbow-all signs of two people lost in the 60's. My only other source of music at that time was Top 40 radio and MTV. This was back when MTV actually played videos by very cool bands. I loved all that stuff and I couldn't get enough of it. Anyway, then something happened: a new style of music came on the airwaves that sounded much different than the Flock of Seagulls stuff that was currently dominating the charts. It definitely was similar to the danceable R&B tracks of the day, except that the vocals were delivered in a much different manner. A few years later, Run-DMC's single "Walk this Way" was released, and at that moment the whole thing really went through the roof. ...read more.

What is so original about that? Apart from promoting violence and the use of drugs, nothing. Anyway, let's face it: rap videos are now as formulaic as heavy metal videos were back in the late 80's early 90's (except there is less hair). And just like everyone loves to watch those 80's shows on VH1 and laugh at people in stonewashed jeans, I'll bet that in ten or fifteen years when they make a TV program to show you what losers people were nowadays, they will no doubt be playing a lot of rap videos. Another thing that sucks about rap now is that the whole "gangster" thing that really took off around ten years ago really hasn't gone away. See, in the beginning, you could rap about other things besides killing people and that was perfectly fine. That's not the case now. The reason for this is that this element of the music is what is most loved by white kids. White kids are, and have been for a while, the major economic force behind rap's popularity, and the powers that be don't want to rock the boat by putting out anything that isn't "tough." White kids like rap because of the packaging. ...read more.

But in a way I don't really care anymore: I just don't have the time or money or the will to be honest to search this stuff out anymore. Sitting through just one bad rap record doesn't seem worth it. Of course, the record companies are to blame for all of this. They got lazy and are just putting the same "thug" stuff out year after year. They're not going to take a chance on anything different, and if they did, nobody's going to buy it anyway because they'll have no idea how to market it. And the last thing they want is music they can't market; because that's the only thing they know and want to do. The record companies in the industry stopped worrying about the quality of the music a long time ago, because they know that's something that's too capricious for them to control. I guess I sound close-minded, but I don't care. If someone gave me a mix CD of some alternative rap that's out these days, I'd give it a listen. But short of that, I wouldn't honestly care if there was never another rap record made. For me, rap was cool in the beginning mainly because it was different. Now it couldn't be any more stale or stupid. ?? ?? ?? ?? James Havis English Language ...read more.