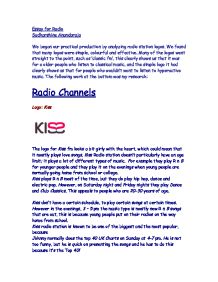 Essay for Radio Sudharshine Anandaraja We began our practical production by analyzing radio station logos. We found that many logos were simple, colourful and effective. Many of the logos went straight to the point, such as 'classic fm', this clearly shows us that it was for a older people who listen to classical music, and the simple logo it had clearly shows us that for people who wouldn't want to listen to hyperactive music. The following work at the bottom was my research: Radio Channels Logo: Kiss The logo for Kiss fm looks a bit girly with the heart, which could mean that it mostly plays love songs. Kiss Radio station doesn't particularly have an age limit; it plays a lot of different types of music. For example they play R n B for younger people and they play it on the evenings when young people are normally going home from school or college. Kiss plays R n B most of the time, but they do play hip hop, dance and electric pop. However, on Saturday night and Friday nights they play Dance and Club Classics. This appeals to people who are 20-30 years of age. Kiss don't have a certain schedule, to play certain songs at certain times. However in the evenings, 3 - 5 pm the music type is mostly new R n B songs that are out, this is because young people put on their radios on the way home from school. ...read more.

Live Hour 22.00 - 00.00 - London's Love songs 01.00 - 03.00 - Sophie Malcom 04.00 - 05.00 - Tim Lichfield Logo: Classic Fm The Logo has a simple design and it is not designed for just girls or boys but both, it looks like it's made for old people because of the simple colour and the font type. Classic fm in general plays slow classical music that includes violins, and piano. It also plays Opera as well. The market audience increases between young children because of the Winnie the pooh songs they put on. But often they put on other songs for older people, these songs are mostly calm, classics and opera. On Saturday night 9 -12, they put on opera. The radio station is usually calm and relax. The presenters usually create suspense on a show to make sure that people keep on listening, especially on Saturday night. The Presenter Jane Jones does the Classic FM Easier Breakfast, she is relaxed and helps you wake up after a good nights sleep, she give detailed information about the news and what's going on around the world, she also gives you the weather for the day and travel news. An Example of a schedule on a Wednesday. 06:00 - Classic FM Easier Breakfast with Jane Jones 08:00 - The Classic FM Breakfast Show with Simon Bates 12:00 - The Classic FM Most Wanted with Jamie Crick 13:00 - Classic FM Requests with Jamie Crick 16:00 - Classic FM Drivetime with Mark ...read more.

However, we also target other people who like to listen to all sorts of music. Similarly, the news agenda reflected that our aim on the radio station is not just in music, but that we also take care of the world around us, we aimed to target at the people in the UK, and people who would like to travel, and give people whether news around the country. Also some of the serious incidents that happened during the day. Our radio station was successful because while we made the radio station because our group were able to give in ideas and work at their own pace, also it was less boring to do and much more fun. We gave each other chances to express their opinions and their ideas, and this helped us improve in our radio project. If I was to do this again, I would like to have a much larger group, to see how people would work together, also people who are similar and not in friendship groups, so that each person will have a new experience and we go through the project. I wouldn't also mind changing this to a much clam radio station, such as classic fm, so that older people will be able to listen to it, it will able be a great experience to us because we will be able to learn about other music types and will be able to open our minds to things that we don't encounter everyday. ...read more.