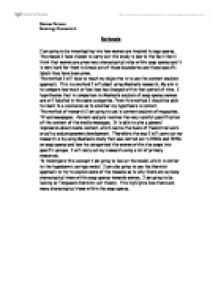 Rationale - how women are treated in soap operas.

Rationale I am going to be investigating into how women are treated in soap operas. The reason I have chosen to carry out this study is due to the fact that I think that women are given very stereotypical roles within soap operas and it is very hard for them to break out of those boundaries and those specific labels they have been given. The method I will take to reach my objective is to use the content analysis approach. This is a method I will adopt using Meehan's research. My aim is to compare how much or how less has changed within that period of time. I hypothesise that in comparison to Meehan's analysis of soap operas women are still labelled in the same categories. From this method I should be able to reach to a conclusion as to whether my hypothesis is correct. The method of research I am going to use is content analysis of magazines, TV and newspaper. Content analysis involves the very careful quantification of the content of the media messages. It is able to give a general impression about media content, which can be the basis of theoretical work or policy and programme development. ...read more.

The Decoy, she is a heroine disguised as a victim. Apparently helpless and dependent, she's actually strong and resourceful. She is quite likely to be mistreated, hurt or captured, but she is capable of overcoming her difficulties. The Siren, is a woman who uses her sexuality to lure her victim to a sticky end. The Courtesan, is close to being a prostitute and perhaps has been one. The Witch, has extraordinary power despite this she is invariably dominated by a man and is persuaded often reluctantly to suppress her powers or use it for his aims. The Matriarch, prestige and authority. a positive light despite the fact that she is too old to be s******y attractive. Her status is almost of that of a hero. This study shows that women are portrayed as neater good or evil, never a combination. It also shows that "good" women are portrayed as submissive, sensitive and domesticated. "Bad" women are portrayed as rebellious, independent and selfish. Male evil characters are always counterbalanced by good ones, this is not so with female evil characters. The number of occupations which women are portrayed as holding is limited to a few, primarily housewife, receptionist and w***e, male roles are also few in number compared to reality, but are more exciting, such as doctor, spies, detective and astronaut. ...read more.

Liberal feminists argue that individuals are trained by the mass media and other social institutions into patterns of behaviour which are performed unconsciously. s*x-roles in particular, have been built up over a long period of time and have become embedded in our culture. Radical feminists identify men as the enemy. They believe that men consciously and unconsciously manipulate social institutions for their own benefit and to the detriment of women. Men hold the dominant positions throughout the media and are able to use them to reflect the images of women which they desire. According to socialist feminists the role of the media is to sustain and perpetuate the capitalist system and the supporting role of women in it. Davies says that those who control the media are almost all rich men, there is every incentive for them to present the capitalist, patriarchal scheme of things as the most attractive system available and to convince the less privileged that the oppression and limitations of their lives are inevitable. According to Skirrow, for example video games are particularly unattractive to women, as they are part of a technology which is identified as male power, and they are about mastering a specifically male anxiety in a specific male way. Shamsa Parveen Sociology Coursework ...read more.