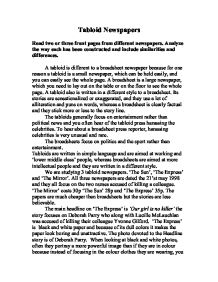 Read two or three front pages from different newspapers - Analyze the way each has been constructed and include similarities and differences.

Tabloid Newspapers Read two or three front pages from different newspapers. Analyze the way each has been constructed and include similarities and differences. A tabloid is different to a broadsheet newspaper because for one reason a tabloid is a small newspaper, which can be held easily, and you can easily see the whole page. A broadsheet is a large newspaper, which you need to lay out on the table or on the floor to see the whole page. A tabloid also is written in a different style to a broadsheet. Its stories are sensationalized or exaggerated, and they use a lot of alliteration and puns on words, whereas a broadsheet is clearly factual and they stick more or less to the story line. The tabloids generally focus on entertainment rather than political news and you often hear of the tabloid press harassing the celebrities. To hear about a broadsheet press reporter, harassing celebrities is very unusual and rare. The broadsheets focus on politics and the sport rather than entertainment. Tabloids are written in simple language and are aimed at working and 'lower middle class' people, whereas broadsheets are aimed at more intellectual people and they are written in a different style. We are studying 3 tabloid newspapers. 'The Sun', 'The Express' and 'The Mirror'. ...read more.

This article focuses on Lucy's story and is all about her ordeal and the fact that Grant is going to celebrate her return with a 'honeymoon and a bacon roll'. The murdered victim is only mentioned once and so is the other nurse. It makes you feel sympathetic for the husband although some of the content of the article is pointlessly put in, however it makes the story more personal. This is a story that appeals to the heart, and is much more emotive, rather that giving bare facts. The only logo on 'The Express' is the one in its title, the knight with the shield and the spear. Its placed between the two words 'The' and 'Express'. 'The Mirror' doesn't have a logo in its title but the advert for the free Magnum uses the Magnum logo. 'The Sun' doesn't use any picture logos but you could say that the title of the newspaper in itself is a logo. 'The Express's' only advert is the one devoted to selling future copies of the newspaper compared to 'The Sun', which has a large advert that tells us what is in the center pages of the paper. ...read more.

Re-write this article as a tabloid press piece. Original Broadsheet article Golf tragedy A boy age 13 died five days after being hit in the nose with a golf club swung by his friend. Scott greenway had a heart attack during surgery after he had gone to hospital to have treatment for his persistent nose bleed. An inquest in Bristol recorded a verdict of accidental death My Tabloid Article Boy, 13, Tragically Killed in golfing accident Some call it a premature death for poor thirteen-year-old Scott Greenway. Tragically he was hit in the nose as he played golf on the local course with his friend. "Scott was standing behind me, giving me some tips and as he stepped away, I swung the club back, it hit him in the nose." We interviewed Scott's friend who caused this accident. Poor bleeding Scott was rushed to hospital where five days later he was able to have an operation to stop his persistent nosebleed. As his anxious parents patiently stood by the theater, the result came back that Scott had died from a heart attack, while under the cruel surgeons knife. Later on, after an inquest where two sobbing parents had broken down, it came back that the Bristol police had recorded Scott's tragic violent death as an accident. ...read more.