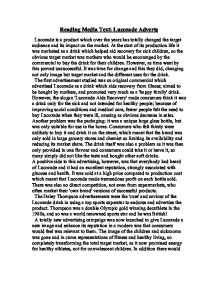 Reading Media Text: Lucozade Adverts Lucozade is a product which over the years has totally changed the target audience and its impact on the market. At the start of its production life it was marketed as a drink which helped aid recovery for sick children, so the obvious target market was mothers who would be encouraged by the commercial to buy the drink for their children. However, as time went by this proved unsuccessful. It was time for change and this they did, changing not only image but target market and the different uses for the drink. The first advertisement studied was an original commercial which advertised Lucozade as a drink which aids recovery from illness; aimed to be bought by mothers, and promoted very much as a 'happy family' drink. However, the slogan 'Lucozade Aids Recovery' made consumers think it was a drink only for the sick and not intended for healthy people; because of improving social conditions and medical care, fewer people felt the need to buy Lucozade when they were ill, causing as obvious decrease in sales. ...read more.

In addition there would be announcements of new products for example providing new flavours that would give Lucozade a much wider appeal through its advertising. Also the first part of the campaign introduced the single-drink, quarter litre bottle. Sales improved dramatically and the newer, smaller bottle was sold in small shops as well as chemists, so widening its availability. The Daley Thompson advertisement starts with an extreme close-up of a red traffic light which draws attention immediately to the screen, as it then switches to a shot of Daley Thompson slowing down from a run, while it states: '8AM Daley Thompson', stops training for a refreshment. Another picture of a red light cross fades to a shot of Daley coming to a standstill: when Daley stops, the viewers stop to focus a shimmering heat on the running track, which is red, the corporate colour of Lucozade. The effect of this dramatic opening is to show the viewer Thompson's total exhaustion, whilst the red colours remind us of the product label. ...read more.

The shots change quickly to reflect the speed of Lucozade, but it ends with a freeze frame of Daley in motion winning his race. The words 'Lucozade' and 'the refreshing glucose drink' appear in the Lucozade 'font' whilst the voice of Des Lynam is heard saying these words, portraying more celebrity endorsement which gives Lucozade an even better image having been endorsed by two famous sport personalities. Sound is also used to excellent effect in the advertisement as the music is of a heavy metal style, which was popular with teenagers at the time, the band being Iron Maiden with their song 'Phantom of the Opera', complementing the images perfectly. The music gives the advertisement a racy and modern edge whilst also appealing to a younger audience than the mothers of the older advertisements. Therefore, the advertisement was constructed extremely well and this was reflected in a huge increase in sales, mainly because of the Daley Thompson endorsement. It helped Lucozade become what it is today, a well known and respected top sports drinks used by the worlds best professional and amateur athletes aswell as ordinary people on the street who have been convinced by a series of very powerful advertisements. ...read more.