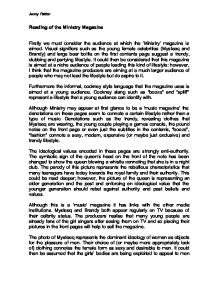 Reading of the Ministry Magazine.

Reading of the Ministry Magazine Firstly we must consider the audience at which the 'Ministry' magazine is aimed. Visual signifiers such as the young female celebrities (Mysteeq and Brandy) and large beer bottle on the first contents page suggest a trendy, clubbing and partying lifestyle. It could then be considered that this magazine is aimed at a niche audience of people leading this kind of lifestyle: however, I think that the magazine producers are aiming at a much larger audience of people who may not lead the lifestyle but do aspire to it. Furthermore the informal, cockney style language that the magazine uses is aimed at a young audience. Cockney slang such as "booze" and "spliff" represent a lifestyle that a young audience can identify with. ...read more.

and trendy lifestyle. The ideological values encoded in these pages are strongly anti-authority. The symbolic sign of the queen's head on the front of the note has been changed to show the queen blowing a whistle connoting that she is in a night club. The parody of this picture represents the rebellious characteristics that many teenagers have today towards the royal family and their authority. This could be read deeper; however, the picture of the queen is representing an older generation and the past and enforcing an ideological value that the younger generation should rebel against authority and past beliefs and values. Although this is a 'music' magazine it has links with the other media institutions. ...read more.

It could then be assumed that the girls' bodies are being exploited to appeal to men and sell the magazine. However, the technical codes of the picture suggest differently. The photograph has been taken from a low angle as though we are looking up (literally and also figuratively) to the girls. We respect them and the trendy, dominating sense of girl power that they represent. In conclusion the magazine is aimed at a young audience who lead or even aspire to the trendy modern lifestyle that the pictures represent. The magazine is enforcing an anti-authority ideology that many young people aspire to. Although some men may buy the magazine just to gawp at the sexy photos of the celebrities the magazine is aiming to connote a more domineering positive representation of young black women who are obviously comfortable with their bodies. Jenny Patten ...read more.