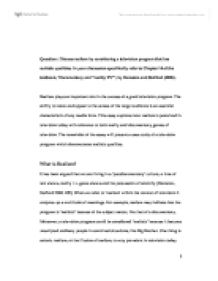 Question : Discuss realism by considering a television program that has realistic qualities. In your discussion specifically refer to Chapter 14 of the textbook, 'Documentary and "reality TV"', by Branston and Stafford (2006). Realism plays an important role in the success of a good television program. The ability to relate and appeal to the senses of the target audience is an essential characteristic of any media form. This essay explores how realism is perceived in television today with reference to both reality and documentary genres of television. The remainder of the essay will present a case study of a television program which demonstrates realistic qualities. What is Realism? It has been argued that we are living in a 'postdocumentary' culture, a time of talk shows, reality t.v, game shows and the persuasion of celebrity (Branston, Stafford 2006: 455). When we refer to 'realism' within the context of television it conjures up a multitude of meanings. For example, realism may indicate that the program is 'realistic' because of the subject matter, like that of a documentary. Moreover, a television program could be considered 'realistic' because it features unscripted ordinary people in contrived situations, like Big Brother. One thing is certain, realism, or the illusion of realism, is very prevalent in television today. Reality tv? Distorted Realism... Flick on the television during peak times on a week night and it's pretty difficult to avoid reality television. ...read more.

The series profiles individuals whose dependency on drugs, alcohol or other compulsive behavior has brought them to an all-time low and estranged them from their family and loved ones. The addicts featured in the series believe they have signed up to participate in a documentary on 'addiction'. Each episode begins with a brief introduction to the subject, and then he or she is followed around by a camera crew. The program ends with a surprise intervention that is staged in which they are confronted with a life-altering choice: rehabilitation or risk losing all contact with the loved ones who instigated the intervention. Often, other tactics are used to persuade the addicted person into treatment, which vary depending on the situation. Interviews with the subject, as well as family members or friends who have agreed to participate, are interspersed throughout. The Intervention falls under the reality tv genre of television and can be described as an 'information programme', as it uses true stories to educate the audience on the subject matter (Branston, Stafford 2006:474). The show has more the feel of a documentary than a reality TV program, although predominately factual there a certain aspects of the program that are clearly constructed. The producers and creators of the program make the rules, they create the setting, they film it according to specific guidelines as to what they think are going to provide good television. ...read more.

The program is filmed in the home of the individual and the intervention, usually takes place at a nearby hotel. The fact that the program could be filmed anywhere is a factor in producing a sense of realism. 5) Not Always a Happy Ending The 'Intervention' program does not always have a happy ending, which contributes in creating a sense of honesty for the audience. In a recent episode of 'Intervention', the featured addict did agree to go to a rehabilitation facility but was kicked out not long after for breaking the rules. Unfortunately he went back to living on the streets and still struggling with his drug addiction and still estranged from his family (Intervention, aired 20/4/2007, 10pm,A&E channel). This program reiterates that sometimes real life is not pretty, and some situations cannot be resolved in a 60 minute episode. Although the 'Intervention' program is a cutting edge and controversial, the fact of the matter is, addiction is a very real issue in today's society. According to the National Drug Strategy, the tangible social costs of drug use in Australia were estimated to be $18.3 billion from in 1998-99. With these statistics like this, addiction should be a matter certainly worthy of attention. (http://www.aihw.gov.au/publications/phe/sdua04/sdua04.pdf) In conclusion, it's apparent that there are still some programs on television that are able to give a 'realistic' insight into certain subject matters. After all, the television is our interaction with the outside world, media should continue to focus attention on these social problems to generate awareness and education with this type of programming. ...read more.