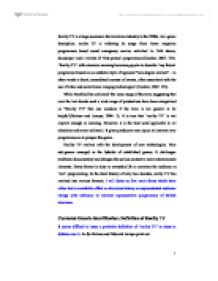 Reality TV is a huge success to the television industry in the 1990s.

Reality TV is a huge success to the television industry in the 1990s. As a genre description, reality TV is widening its usage from 'news magazine programmes based round emergency service activities' to 'talk shows, docusoaps' and a variety of 'first-person' programmes (Creeber, 2001: 135). 'Reality TV' with extensive meaning becomes popular to describe 'any factual programme based on an aesthetic style of apparent "zero-degree realism" - in other words a direct, unmediated account of events, often associated with the use of video and surveillance-imaging technologies' (Creeber, 2001: 135). While Barnfield has criticized 'the loose usage of the term, suggesting that over the last decade such a wide range of productions have been categorized as "Reality TV" that one wonders if the term is too general to be helpful'(Holmes and Jermyn, 2004: 3). It is true that 'reality TV' is not explicit enough in meaning. However, it is the best word applicable to all situations and never unilateral. It gives producers more space to innovate new programmes as to prosper this genre. Reality TV evolves with the development of new technologies. New sub-genres emerged as the hybrids of established genres. It challenges traditional documentary and changes the serious content to more entertainment elements. Every format is close to everyday life to convince the audience as 'real' programming. In the short history of only two decades, reality TV has evolved into various formats. I will focus on five main forms which have either had a remarkable effect on television history or unprecedented audience ratings with reference to relevant representative programmes of British television. Contested Generic Identification: Definition of Reality TV It seems difficult to issue a particular definition of 'reality TV' to attest to debates over it. ...read more.

They return with anything up to 200 hours of material and attend all the edit sessions, from an initial assembly which is viewed and discussed at length to the offline and online edit processes. (Dowmunt, 1993: 167) The format of Video Diaries is a development of documentary. Gareth Palmer has explained that it 'imported the authorizing and legitimizing discourse of documentary into the personal, and in doing so it imported also documentary's ordering principle into individual lives' (Palmer, 2003:168). It was popular to the audience and also gained acclaim from the critics because of its flexibility in recording reality. Nevertheless there were debates that the producers had already controlled the programme by selecting the diarists, and there were also problems of quality and legality. New Observational Documentary: Emergence of Docusoap Docusoap is one form of the new observational documentary and one sub-genre of reality TV. It is a hybrid of documentary and soap-opera. It improves from serious documentary to emphasize on entertainment, especially everyday lives. 'Developed in the UK in the mid-1990s, the docusoap enjoyed unprecedented success for roughly a four-year period (1996-2000)' (Kilborn, 2003: 87). Docusoap combines documentary and drama. There are elements of narration, interviews and background music, and similar sequences as soap-opera. Each episode has a certain title and focuses on character, personalities, plot or situation. Technological advances promote the development of new observational documentary. New technologies like lightweight cameras, 'portable sound equipment' and 'non-linear editing system' accelerate editing process with better quality and effect. Besides, financial benefits also attract producers to choose new technologies. 'As Paul Hamann has commented, docusoaps already cost on average only a third of the price of the equivalent in light entertainment or sitcoms' (Bruzzi, 2000: 77). ...read more.

'We've been looking at the housemates through the eyes of thirty-one unforgiving cameras - we have seen them at their best and also at their worst' (Ritchie, 2001: 279). What they need is just to relax and enjoy their time. 'For all of them, without exception, it has been an amazing experience. They have learned a great deal about themselves, and the rest of us have learned not just lots about them, but also about human nature in general' (Ritchie, 2001: 279). However, all the participants are under much pressure exposing their lives to millions of audience. There is probably some negative effect on the psychology of most participants. Gareth Palmer calls the programme 'a psychological experiment'. Programme experience is not always as wonderful as Ritchie's comment in the above paragraph. In Sweden there was a suicide of a participant on a similar programme (Palmer, 2003: 185). So in Big Brother 'a team of mental health professionals will oversee both the selection process and the psychological well being of the participants while they are in the house' (Palmer, 2003: 185). Big Brother creates a small society for the housemates away from the outside world. There are conflicts and also friendship. The participants are competitors and also partners. As the audience watch the trivia of their daily routine, the voiceover commentary helps them understand the situations. Big Brother, a hybrid of different forms with popular interactive elements, is a new format of reality TV. It is leading a new trend of reality programming. Many independent television production companies are professional and experienced in making these new reality shows. Channel 4 and ITV, such non-mainstream commercial channels have shown many this kind of reality programmes. The audience are looking forward to more innovation of reality TV. ...read more.