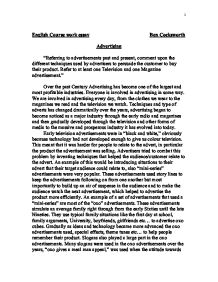 Referring to advertisements past and present, comment upon the different techniques used by advertisers to persuade the customer to buy their product. Refer to at least one Television and one Magazine advertisement

English Course work essay Ben Cocksworth Advertising "Referring to advertisements past and present, comment upon the different techniques used by advertisers to persuade the customer to buy their product. Refer to at least one Television and one Magazine advertisement." Over the past Century Advertising has become one of the largest and most profitable industries. Everyone is involved in advertising in some way. We are involved in advertising every day, from the clothes we wear to the magazines we read and the television we watch. Techniques and type of adverts has changed dramatically over the years, advertising began to become noticed as a major industry through the early radio and magazines and then gradually developed through the television and other forms of media to the massive and prosperous industry it has evolved into today. Early television advertisements were in "black and white," obviously because technology had not developed enough to give us colour television. This meant that it was harder for people to relate to the advert, in particular the product the advertisement was selling. Advertisers tried to combat this problem by inventing techniques that helped the audience/customer relate to the advert. An example of this would be introducing situations to their advert that their target audience could relate to, also "mini-series" advertisements were very popular. ...read more.

This uses consonance in the slogan "P-p-p-p pick-up a Penguin." Pester power has also become a popular technique in advertising. This is when the advertisement targets the younger generation as their target audience. This then has a chain like reaction. The child begins to "nag," or "pester," their parents to buy them that particular product, the parents then eventually buy the child the product. This often happens in advertisements, particularly for toys around Christmas time. Also as well as targeting children, advertisements also target parents. This is usually when advertising something which is for a child, the advert exploits the protective side of the parent to hopefully encourage them to buy the product, to in turn help or make their children safer. A target audience is used in most advertisements, this is so that the product which is being sold corresponds with the type of people who are going to be watching the advertisement and the type of people who are intrigued with the advertisement. For example Adult dating agency advertisements are not shown during children's programs. They are shown late at night when mainly only adults are watching. Also a popular action movie, soon to be shown on television would not be advertised with classical music, it would be advertised with exiting lively music, to portrait the theme of the film. ...read more.

They do this with shock advertisements, bright or attractive backgrounds, attractive men or women, jokes or humorous pictures etc... I have commented on an advertisement from a magazine. This advertisement is advertising "Cat" shoes. The first thing that your eye is drawn to in the advertisement is the bright yellow "Cat" logo in the top left-hand corner, this is because we are used to reading from left to right so we automatically look to the top left corner of everything we read. The next thing noticed is the close up view of a pair of Cat shoes, below that image is the same picture but it is zoomed out. You can now see that the shoes are been worn by an attractive young man, who is talking with another man, in the street. This part of the advertisement is stereotypical because it is suggesting that people who wear the kind of clothes shown in the advertisement are popular and attractive, and if you buy Cat shoes then you two will become popular and attractive. At the bottom of the advertisement is the copy (the words on the advertisement), which displays the Cat logo and various phone numbers and website addresses. I hope that this essay has given you an insight into the techniques used by advertisers to sell their product and the positive and negative results that may cause. 1 ...read more.