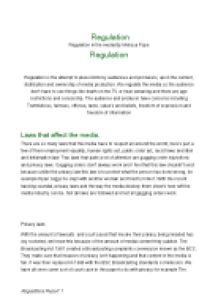 Regulation of the Media.

﻿Regulation Regulation in the media By Melissa Pope Regulation Regulation is the attempt to place limits by audiences and producers, upon the content, distribution and ownership of media production. We regulate the media so the audience don?t have to see things like death on the TV or hear swearing and there are age restrictions and censorship. The audience and producer have concerns including Truthfulness, fairness, offense, taste, value?s and beliefs, freedom of expression and freedom of information Laws that affect the media. There are so many laws that the media have to respect all around the world, here?s just a few of them employment equality, human rights act, public order act, r****t laws and libel and defamation law. Two laws that quite a lot of attention are gagging order injunctions and privacy laws. Gagging orders don?t always work and I feel that this law shouldn?t exist because unlike the privacy law this law is to protect what the person has done wrong, for example Ryan Giggs he slept with another woman and tried to hide it. With the recent hacking scandal, privacy laws and the way the media disobey them show?s how ruff the media industry can be. ...read more.

However if the film isn?t up to their standards because they are a statutory body they can always make sure they film isn?t released until it is changed. For example Human centipede 2 was sent back because it was to disturbing however with a cut of 2 minutes it was allowed the go ahead. What I find strange is that going by this quote in the BBFC annual report in 1996/97 they seem to be against the idea of violence "wondered whether Hollywood would ever 'wake up with a conscience' about teenagers and the drip drip effect of films which teach violence, glorify it and celebrate the rewards it brings". However they still let violent films being shown on TV. In a study people found out that most serial killers watched violent films before they killed. Non-Statutory bodies There not part of the government but they take action and in a small group discuss what is wrong with it and then take it to statutory bodies. ???? Advertising standards Authority (ASA) are an ?Independent regulator of advertising? They make sure that all adverts in the UK are truthful, honest, and legal. ...read more.

Patent - Patent is something when you would pay money for and have to fill out lots of legal documents, you would do this for an invention like a unique design that hasn?t been created yet. Patents are made by national governments which allows the creator rights to use, manufacture or sell the product. For a patent to be approved it takes 2 to 3 years. Design - Most of the time the designer owns the rights to the design but if they are commissioned the design belongs to them. Unregistered design rights protect shapes which are used in most designs. Designs can be subject to copyright and design rights. They could also be done in a similar way to patents Trademarks - Trademarks can be a name, slogan, word, design, or other unique ideas. If you register in the UK, USA or Japan it means that it will only be protected in that country. You know if the trademark is registered by a symbol or abbreviation ?TM?. For example Ben and Jerry?s is a registered trade mark and can?t be used again however there are rules when making a trademark as it can?t have obvious things like shapes as this put a limit on all future trademarks. Regualtions Report ...read more.