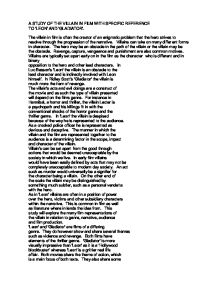 Representaion of villain in film

A STUDY OF THE VILLAIN IN FILM WITH SPECIFIC REFERENCE TO 'LEON' AND 'GLADIATOR'. The villain in film is often the creator of an enigmatic problem that the hero strives to resolve through the progression of the narrative. Villains can take on many different forms in character. The hero may be an obstacle in the path of the villain or the villain may be the obstacle. Revenge, capture, vengeance and punishment are also common motives. Villains are typically set apart early on in the film as the character who is different and in binary opposition to the hero and other lead characters. In Luc Besson's 'Leon' the villain is an obstacle to the lead character and is indirectly involved with Leon himself. In Ridley Scott's 'Gladiator' the villain is much more the item of revenge. The villain's acts and evil doings are a construct of the movie and as such the type of villain presented will depend on the films genre. For instance in Hannibal, a horror and thriller, the villain Lecter is a psychopath and his killings fit in with the conventional shocks of the horror genre and the thriller genre. In 'Leon' the villain is despised because of the way he is represented to the audience. ...read more.

In the time of the cold war the Russians became the stereotypical villains in films such as the James Bond series. More recently South Africa has taken this role as 'Die Hard With A Vengeance' shows. This is mainly because of the American origin of such films with America being the primary target audience. These villains are represented as in opposition to the American ideology. The British accent of Stansfield and the murderous acts of the Emperor in 'Leon' and 'Gladiator' anchor this. 'Leon' and 'Gladiator' have strong character driven plots where the hero and the villain are in binary opposition to each other. Their ideological, professional and personal lives clash, which results in the creation of the dilemma and the enigma. In both films the villains are traitorous. In 'Leon' Stansfield is a drugs baron who is treacherous to his profession as he is a corrupt police officer. In betraying the police he is also betraying society and its values, as it is a social institution. In 'Gladiator' the Emperor deceives his friends, family and his Roman subjects. In performing these acts the villains become in binary opposition to the established hero. 'Leon' contains a contradiction to the theory I have proposed as he is also of foreign descent having an Italian accent. ...read more.

As a Hollywood blockbuster 'Gladiators' audience is vastly different to 'Leon's', as it would appeal to fans of various other genres. Ridley Scott has various other big name movies to his credit including 'Alien' and 'Hannibal'. As 'Gladiators' director the grand scale of the film is anchored. The action genre is typically male targeted as research has found that females prefer films where the roles have more of an emotional attachment such as romance and drama. Both 'Leon' and 'Gladiator' would prioritise on a male audience as the movies would primarily appeal to them. 'Leon's' audience would be male with intertextual references of films such as 'Le Femme Nikita' and 'Ronin'. This audiences ideology is anchored in 'Leon' with the use of representations of violence, guns, a lead character of similar values and positioning of Leon against the evil 'British' Stansfield. This is part of their binary opposition which is basically good/evil and rather ironically crime/law. The classes of Matilda and Leon are ideologically opposite to the corruption of Stansfield and his higher-class job with the police which he abuses. Iconography of New Your includes skyscrapers and yellow cabs. Leon is presented as a stereotypical Italian as he is connected to the mob and his boss owns an Italian restaurant. The audience is positioned in Leon to feel empathy for the hero and Matilda and there is a fairly simple preferred reading to the text. ...read more.