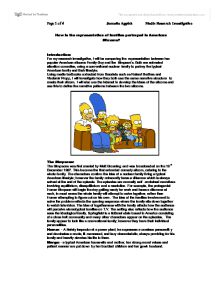 Representation of families in animated sitcoms

How is the representation of families portrayed in American Sitcoms? Introduction: For my research investigative, I will be comparing the representation between two popular American sitcoms Family Guy and the Simpson's. Both are animated situation comedies, using a conventional nuclear family to portray the typical American family and their lifestyle. Using media textbooks extracted from theorists such as Roland Barthes and Vladamir Propp, I will investigate how they both use the same narrative structure to create their sitcom. I will also use the internet to develop the ideas of the sitcoms and use this to define the narrative patterns between the two sitcoms. The Simpsons: The Simpsons was first created by Matt Groening and was broadcasted on the 19th December 1987. This became the first animated comedy sitcom, catering to the whole family. The characters confirm the idea of a nuclear family living a typical American lifestyle; however the family coherently faces a dilemma which is always solved at the end of the episode. The episodes are normally self-contained narratives involving equilibrium, disequilibrium and a resolution. For example, the protagonist Homer Simpson will begin the day getting ready for work and faces a dilemma at work, in most cases the whole family will attempt to solve together, rather than Homer attempting to figure out on his own. The idea of the families involvement to solve the problem reflects the opening sequence where the family sits down together to watch television. ...read more.

Even though they are animated characters which can develop, the producers have chosen not to and have stayed the same, although the new technology which has developed over the past decade can transform them. They have recently updated the opening sequence, revealing more characters that appear more often in the episodes. This idea keeps the audience interested in character development and the change of characters over time. One idea that hasn't changed since the beginning of the Simpsons is the theme song which is recognised as the Simpsons theme tune all over the world. The orchestral soundtrack is lively and upbeat, which proves the entertainment aspect of the sitcom. The Simpsons had been provided to humour families during prime time, capturing audiences with its exciting linear narrative and realism in each episode. However The Simpsons had been criticized frequently for their lack of quality in the episodes and Bart Simpson's rebellious nature having an effect on boys and acting as a role model towards the younger male audience. Family Guy Family guy consists of the Griffins, a dysfunctional family set in a fictional town of Quahog, Rhode Island America. This is also a situational comedy; however the content contains satirical adult humour, amusing American culture. It's mostly recognised for its cutthroat gags on disability, s****l behaviour and cutaway scenes. The Griffin family is constantly compared to the Simpsons, consisting of similar family values and characteristics. ...read more.

Family guy appears to share the same family values as the Simpsons, however the content and the audience is clearly different. The simpsons share family values and humour the typical American culture, however their humour is directed towards adults and children, using satirical wittiness and frequently punning on American products such as Mad TV or the actual TV production company that shows the Simpsons, Fox. Whereas family guy is shown during the late night schedule and the content uses extreme vulgar adult content, profanity, violence and nudity. In a sense, family guy's title does mislead the audience into thinking that the program will be based on the same values the Simpsons produces. This is where they differ in style and content. Following my research, I have decided to challenge the conventional representation of families in sitcoms. I will create a DVD poster of a brand new situational comedy based on a family which appear to be a dysfunctional family which struggle to follow the conventional structure of a beginning scene, a dilemma then a resolution. They share the conventional ideology that families are appeared to be shown. I will use Adobe Photoshop to create my poster and Macromedia Flash to create the characters. Stereotypically, the male protagonist is portrayed as reliant on the other family members to "bail" him out. However in my production, I will portray the male protagonist as independent and smart and place the "male characteristics" on another character, for e.g. the son. ?? ?? ?? ?? Page 1 of 4 Jeanette Appiah Media Research Investigative ...read more.