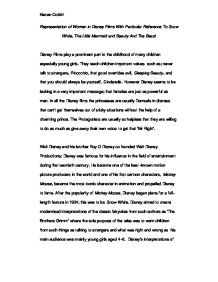 Representation of Women In Disney Films wit Particular Reference to Snow White, Beauty and the Beast and The Little Mermaid

Representation of Women in Disney Films With Particular Reference To Snow White, The Little Mermaid and Beauty And The Beast Disney Films play a prominent part in the childhood of many children especially young girls. They teach children important values such as; never talk to strangers, Pinocchio, that good overrides evil, Sleeping Beauty, and that you should always be yourself, Cinderella. However Disney seems to be lacking in a very important message; that females are just as powerful as men. In all the Disney films the princesses are usually Damsels in distress that can't get themselves out of sticky situations without the help of a charming prince. The Protagonists are usually so helpless that they are willing to do as much as give away their own voice to get that 'Mr Right'. Walt Disney and his brother Roy O Disney co founded Walt Disney Productions; Disney was famous for his influence in the field of entertainment during the twentieth century. He became one of the best-known motion picture producers in the world and one of his first cartoon characters, Mickey Mouse, became the most iconic character in animation and propelled Disney to fame. After the popularity of Mickey Mouse, Disney began plans for a full-length feature in 1934; this was to be Snow White. Disney aimed to create modernised interpretations of the classic fairytales from such authors as 'The Brothers Grimm' where the sole purpose of the tales was to warn children from such things as talking to strangers and what was right and wrong as his main audience was mainly young girls aged 4-8. Disney's interpretations of the classic tales have pretty much kept the morals from the originals but have also made them much more children-friendly. ...read more.

They also had another thing in common; they were all single. This sent out the ideological message that if you're not beautiful then you will grow up bitter, evil and most importantly single. There were even connotations that Cinderella's evil step-mother had killed her father. Another factor of Snow White that enraged a lot of women was that every time Snow White found herself in a sticky situation, she just fluttered her eye lashes and a man (or seven) rushed to her beck and call. This showed that sex sells. Over the years Disney's Andy Mooney got the idea of bringing all the princesses together in a team to produce Disney princess merchandise. This has seen Snow white become bustier and slimmer over the years. This has ideological message that sex sells and also suggests to girls what the right image is. Bringing all the girls together seems like it conveys the right message about team work and how women should stick together, however it was also argued that all the princesses featured were all the typically na�ve, beautiful and white ones. Mulan, Pocahontas, Megra and Esmerelda are not part of the group therefore suggesting that these races are considered as less important. Due to some outrage about the lack of diversity in the group of princesses, Disney have now released their first black princess in the animated version of The Princess And The Frog (2009), this sounds like Disney have finally pleased worried mothers, feminists and all cultures however once again there is something to criticise about Disney's choice in characters. In The Princess And The Frog the princess, Tiana falls in love with the prince, Naveen. Although Naveen is Indian, critics argued that his features were very like a white males features. ...read more.

Although, strong-minded, she too gives up something in order to save a man; her independence. Esmeralda's independence is also portrayed in a negative light; she wears revealing clothes and uses her body as a way to get things, when captured she is even changed from a skimpy top and skirt into a long white dress, this connotes that she has been purged of her sexuality. Another criticism of Esmeralda is that she chooses the handsome soldier over the kind, deformed bell-ringer. Pocahontas, although independent and a peace-keeper, is criticised for having the same clich� "Happy ever after" by falling in love. Along with the very independent Mulan, these girls don't cut it to be part of the Disney princess gang. Jasmine however is part of the gang yet maybe for a good reason, she is one of the most childish girls out of everyone; she needs Aladdin to save her, she uses her body to save Aladdin and can't marry anyone without the permission of her father. However there are two things to take into consideration; she rebels against everyone by escaping the palace and also favours personality over looks and wealth. 'How dare you? All of you! Standing around deciding my future. I am not a prize to be won!' There is a positive factor they all have in common; they are all of different ethnicities. However it is argued that they all have Caucasian features. In conclusion, although pretty much adapted word for word from the original tales, I feel that Disney represents women quite unfairly as they are represented as either; young helpless virgins, independent sexual objects of desire or old, single, evil women who take their jealousy out of these fresh virgins by making sure they never see their happily ever after. ?? ?? ?? ?? Kieran Corbitt ...read more.