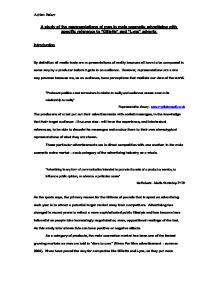 Representations of men in lynx and gillette adverts

A study of the representations of men in male cosmetic advertising with specific reference to "Gillette" and "Lynx" adverts Introduction By definition all media texts are re-presentations of reality because all have to be composed in some way by a producer before it gets to an audience. However, representations are a two way process because we, as an audience, have perceptions that mediate our view of the world. "Producers position a text somewhere in relation to reality and audiences assess a text on its relationship to reality" Representation theory - www.mediaknowall.co.uk The producers of a text put out their advertisements with coded messages, in the knowledge that their target audience - if no-one else - will have the experience, and intertextual references, to be able to decode the messages and anchor them to their own stereotypical representations of what they are shown. These particular advertisements are in direct competition with one another in the male cosmetic sales market - a sub-category of the advertising industry as a whole. "Advertising is any form of communication intended to promote the sale of a product or service, to influence public opinion, or advance a particular cause" McRoberts - Media Workshop P170 As the quote says, the primary reason for the billions of pounds that is spent on advertising each year is to attract a potential target market away from competitors. Advertising has changed in recent years to reflect a more sophisticated public lifestyle and has become less influential as people take increasingly negotiated or, even, oppositional readings of the text. As this study later shows this can have positive or negative effects. As a category of products, the male cosmetics market has been one of the fastest growing markets as men are told to "dare to care" (Nivea For Men advertisement - summer 2002). Nivea have paved the way for companies like Gillette and Lynx, as they put more emphasis on advertising, because now men have accepted that it won't be frowned upon if they want to take care of their appearance. ...read more.

The second scene, where the formula is too strong, and the third, where it is slightly too weak are the complication stage of the theory that states that the established enigma gets developed even further. The outcome is found in the next scene, on the beach. As the female embraces the male with a smile on her face the voiceover emphasises its importance and says, "Just right". This leaves the audience in no doubt as to what the aim of the product and this male character in particular, is and was. The reaction stage of the applicable narrative theory is delivered to the audience in the form of a recognised strapline - "The Lynx Effect". The producers of the advert are pushing home the point that this outcome wouldn't have been a happy one without the intervention of their product in the males life. Knowing what the product does through the characters in a narrative scenario, as these both do, is the argument used by Len Masterman when he said that the reader is meant to link the product with the use that is made of it; i.e. the products in this case are used for getting females to pay males more attention. This also links into work from theorists Leiss and Klein who asserted that adverts were no longer about the product and all about their social and ideological values. These two adverts fall into 1 of their 4 categories - lifestyle advertising. By attributing the products qualities they don't physically have, and anchoring the images with their expected use (in this case attracting a woman) the target audience is now drawing its importance from their own ideology. For example, our modern society has a large emphasis on finding and keeping a partner and that means that the men watching these ads will take the ideological subtext and think, "This is an essential product for me to achieve my aim in society and life" Both adverts have proved the idea that the message ...read more.

The two different adverts show a different type of male character in the lead. This shows a different stereotype and perhaps a leaning, by Gillette, to trying to attract women to buy the product for their man. Their advert represents men as only being real men if they have the muscles, tan and good looks - stereotypically masculine. The Lynx advert has a completely different male character pivotal to the story. He is not the definition of masculinity, but just a plain man who would just blend into a crowd walking down the street. That makes his transformation to irresistible, after he uses the deodorant, even more of a selling point to the ordinary man looking for a female partner. However different the male characters are, they still seem to be represented in the same basic way - they need the product to get the sense of self worth, conformity that leads them to become attractive to the opposite s*x. This is a direct challenge to the definition of a perfect masculine male, but that seems to make no difference to the target market when they buy the product. This challenge of the stereotypical male is readily accepted and understood in modern times because of a change of ideology in society in general. The producers of any media text, whether it be an advert or not, now have any male lead solving a disruption and finishing by "getting the girl". That hegemony is what we as viewers and readers have come to see as the norm when we have been subjected to the same scenario again and again (as David Morley has suggested) just dressed up with different central plots. This change of ideology in society has led to a change in advertising, which is central in enforcing any of these newer ideologies, and that is why these two particular ads work so well in representing males as the majority of viewers have been brought up to see them. ...read more.