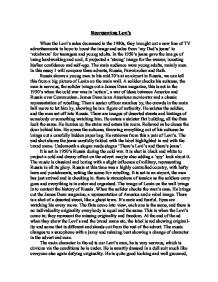 Representing Levi's When the Levi's sales decreased in the 1980s, they brought out a new line of TV advertisements in hope to boost the image and sales from 'my Dad's jeans' to 'rebalware' for teenagers and young adults. In the 1950's jeans gave the image of being hardworking and cool, it projected a 'strong' image for the wearer, boosting his/her confidence and self-ego. The main audience were young adults, mainly men. In this essay I will compare three adverts, Russia, Pawnbroker and Bath. Russia shows a young man in his mid 20's at an airport in Russia, we can tell this from a big picture of Lenin on the main wall. A solider checks his suitcase, the man is nervous, the solider brings out a James Dean magazine, this is set in the 1950's when the cold war was in 'action', a war of ideas between America and Russia over Communism. James Dean is an American movie star and a classic representation of rebelling. Then a senior officer marches by, the crowds in the main hall move to let him by, showing he is a figure of authority. He salutes the soldier, and the man set off into Russia. ...read more.

A young couple run out of fuel so stop off to get some. They have no money so the man gets out and enters a pawnbroker to try his luck. He tries his watch first, the owner examines it and shakes his head, he already has enough watches. Next he tries his sunglasses; again it's a no. So he gives up and walks to the door when then owner calls him back and points to the jeans. The ad next shows him at the car widow from the woman's point of view, he waves a wad of cash. He opens the door revealing awful white trousers, the woman laughs, he laughs, he enters the car. The next view is of the pawnbroker owner carefully setting out jeans with the caption 'Originals have always been sough after'. It is set in down town America with run down hoses/flats and back alleys to represent, trouble and again rebelling. It is a sunny, lazy afternoon with mainly dull browns and oranges as the main colours a bit like the movies. The music is ' Nobody's home, but the rent' by B.B King. It looks as if it is set I the late 70's early 80's Originality is represented when the pawnbroker only accepts the Levi's and not the watch or sunglasses, giving the impression that only Levi's will do. ...read more.

He is a laid back hero who manages to save the day in some context. However in 'Russia' he is completely different, he still has the classic rebel image. But has no time to worry about his hair or appearance, he is to tied up in rebelling and being courageous. Each ad seems to show a different aspect of Levi's man; there is no set Levi's man just our stereotypical view of him. However different he looks, behaves or acts he will always be a rebel, 'women want him, and men want to be him'. Levi's woman hardly features, showing jeans as a more masculine item of clothing. But when she does, she is always either wearing the jeans or admiring the jeans or man in them. The models are always good-looking young people, giving the message that 'you will look good if you wear Levi's. This line of ads shows jeans as being something for the younger members of society, the 'generation x'. They are portrayed as being cool and trendy with the ultimate originality and rebel image. I think this campaign was a good way to bring back Levi's, and was successful at doing so. But whichever way you look at it, it all leads down to just being another way to boost sales and make more money. ...read more.