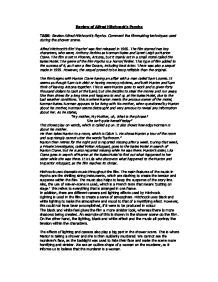 Review of Alfred Hitchcock's Psycho TASK: Review Alfred Hitchcock's Psycho. Comment the filmmaking techniques used during the shower scene. Alfred Hitchcock's film 'Psycho' was first released in 1960. The film starred two key characters, who were; Anthony Perkins as Norman Bates and Janet Leigh as Marion Crane. The film is set in Phoenix, Arizona, but it mainly set in a small motel called the Bates Motel. The genre of the film Psycho is a horror/thriller. This type of film added to the success of it, as it won a few Oscars, including Best Actor. There was also a sequel made in 1999. However, the sequel proved to be less profitable than the original. The film begins with Marion Crane having an affair with a man called Sam Loomis. It seems as though Sam is in debt or having money problems, and both Marion and Sam think of leaving Arizona together. This is were Marion goes to work and is given forty thousand dollars to cash at the bank, but she decides to steal the money and run away. She then drives for a long time and happens to end up at the Bates Motel, due to the bad weather conditions. This is where Marion meets the anxious owner of the motel, Norman Bates. Norman appears to be living with his mother, when questioned by Marion about his mother, Norman seems distraught and very anxious to reveal any information about her. ...read more.

We see an outline shape of a woman on the murderer, so it informs us to believe that the murderer is a woman. The shower scene itself, took seven days to shoot and over seventy cameras were set up for the shooting. The effect of the cameras shows how there were quick shots being taken in a short space of approximately two minutes. When the production of the film was released, there were over 70 quick shots taken in the forty-five second period. The shots were made up of the climax to Marion's murder and the murder it self. But we never see the knife stabbing into Marion's body. As an alternative, we see shots of the knife and sound affects are added to the appearance of the knife, which is attacking Marion. This then gives the impression that Marion is actually being stabbed. Each shot taken was edited for a montage effect, which is the process of editing. Montage is the process of selecting; editing and piecing together separate sections of cinema film to form a continuous piece. The sound affects and the shrilling music combine to add more suspense, but all sounds stop for a silence when Marion is helpless and pulls onto the curtain railing and falls onto the floor. Additionally, The shower scene also contains many different shots from which they come from many different angles. ...read more.

He becomes very persistent with Marion, when she suggests that his mother ought to be placed into an institution. But Norman replies angrily, ""You mean an institution? A madhouse? ... Have you ever seen inside one of those places? The laughing and the tears! And the eyes studying you." This shows that Norman has strong feelings and emotions for his mother. The quote also suggests that Norman could have been in one of the institutions, as he seems to know a lot about them. In conclusion, there are a few reasons that explain why Psycho was classed as a classic film of all time. The director, Hitchcock used modern techniques and varied them in different ways, which had not been done at the time. He tested different lighting structures with many different camera shots and angles. An example of this can be the backlighting used, to give the film a mysterious feeling. The lighting helped change the mood and atmosphere of the film. Also, the music played a big part in the film; it added tension, suspense and a chilling feeling to it. The string instruments in the sharp music indicated caution between scenes and whether something was going to happen. Hitchcock used film noir. This was much more effective than if he had used colour film in Psycho. It makes the film look more sinister and mysterious as well as authentic. The techniques used by Hitchcock were well placed and presented, that is what makes it the classic film that it has been so famous for all these years. ...read more.