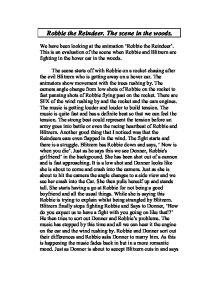 Robbie the Reindeer - Evaluation of the scene in the woods.

Robbie the Reindeer. The scene in the woods. We have been looking at the animation 'Robbie the Reindeer'. This is an evaluation of the scene when Robbie and Blitzern are fighting in the hover car in the woods. The scene starts off with Robbie on a rocket chasing after the evil Blitzern who is getting away on a hover car. The animators show movement with the trees rushing by. The camera angle change from low shots of Robbie on the rocket to fast panning shots of Robbie flying past on the rocket. There are SFX of the wind rushing by and the rocket and the cars engines. ...read more.

Just as she is about to hit the camera the angle changes to a side view and we see her crash into the Car. She then pulls herself up and stands tall. She starts having a go at Robbie for not being a good boyfriend and all the usual things. While she is saying this Robbie is trying to explain whilst being strangled by Blitzern. Blitzern finally stops fighting Robbie and Says to Donner, 'How do you expect us to have a fight with you going on like that!?' He then tries to sort out Donner and Robbie's problems. The music has stopped by this time and all we can hear it the engine on the car and the wind rushing by. ...read more.

She says 'No one, but No one hurts my Fianc�!' The camera zooms into her face and we can see that she is very angry. The music has changed again and is still dramatic and tension building but not as loud because it is more feminine. She punches Blitzern and he is wrapped around a tree branch and shoots off up into the sky. The music is now in a triumphant style because Robbie and Donner have won. Blitzern then falls to the ground and bounces in to the jail, which is already, crammed full of his rabbit helpers. Then we see that the Park has been turned into a Viking Disco Park. We see a DJ on the decks playing Robbie Williams' Rock DJ tune. This is linked to Robbie the reindeer's name and also the music is very contemporary and happy. ...read more.