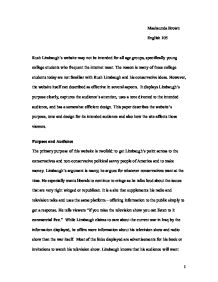 Rush Limbaugh's website may not be intended for all age groups, specifically young college students who frequent the internet most.

Mashaunda Brown English 105 Rush Limbaugh's website may not be intended for all age groups, specifically young college students who frequent the internet most. The reason is many of these college students today are not familiar with Rush Limbaugh and his conservative ideas. However, the website itself can described as effective in several aspects. It displays Limbaugh's purpose clearly, captures the audience's attention, uses a tone directed to the intended audience, and has a somewhat efficient design. This paper describes the website's purpose, tone and design for its intended audience and also how the site affects those viewers. Purpose and Audience The primary purpose of this website is twofold: to get Limbaugh's point across to the conservatives and non-conservative political savvy people of America and to make money. Limbaugh's argument is many; he argues for whatever conservatives want at the time. He especially wants liberals to continue to cringe as he talks loud about the issues that are very right winged or republican. ...read more.

While the conservatives cheer for the troops and the president, the liberals rally in opposition of war in general. Tone Limbaugh's web page aims at a political savvy audience. His tone is effective, as he understands that the Democratic beliefs and values differ from those of the conservative American but all audiences will continue to listen because they want to argue their views. For example, democrats were pretty much against the war and Limbaugh's page is filled with topics about the war and its importance to our nation. Limbaugh literally sets the tone for his conservative audience members. These are his best supporters and they see him as an authority in his field and credible in his political stance. He uses political graphics and photos to imply that these people, like the president, think in the same way that Rush Limbaugh does and therefore support his views. ...read more.

Although the front web page seems overcrowded, the colors help the eyes contrast the text, point sizes, photos, etc. Dark colors are used the most to make certain things stand out more than others. Light or shaded blues, yellow, and red are used for contrast and to help the audience follow links and find specific information. For example, the links on his page are basically the same color. Regular viewers become familiar with the format and design and know exactly where to find certain information. Conclusion Even college students today who know the least about Rush Limbaugh will probably find the overall website most effective. Some of Limbaugh's political points and arguments can strike a nerve in even the less savvy student. He definitely keeps the audience's interests through his loud tone (audio and text) and abundance of information and topics. And, while the design can be exhausting to the viewer, the colors, fonts, and other formatting strategies help the make the website readable and easy to browse. 1 ...read more.